Kenny and I had not been to Piney Falls (near Spring City, TN) in several months, so we headed down there on Sun. Aug. 16. We were so disappoint

ed to see the damage some inconsiderate people had done while riding their 4-wheelers. The recent rains had turned much of the trail into a huge mud hole. Only the frogs seemed to appreciate the extra water! The state once had large metal poles across the trails to keep vehicles out, but the riders knocked th

em down, tore down the "hiking only" signs and proceeded to tear up the trails. Eventually, they will damage the road so much they will no longer be able to use it. To make things even worse, the trash they leave behind is so ugly. It is a shame there have to be people out there who just don't care what they do to the environment! OK, I'll get off my soapbox now!

This trail is not especially good for wildflowers, but yesterday we saw loads of mushroo

ms and puffballs. One very pretty wildflower I noticed growing on the cliff below the waterfall was the Roundleaf Catchfly. It has bright red, star-shaped


The most interesting things we saw were the various kinds of spiders. Since there ar 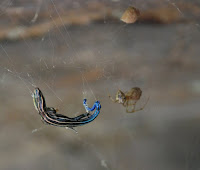 e so many cliffs along that trail, there are many places for spiders to build

their webs. We were amazed at some of the prey the spiders had caught. Among them were: a cockroach, a bumblebee, a katydid, a Daddy Long-legs, and even a small 5-lined ("blue-tailed") skink! I enjoyed seeing the Lampshade spiders in their cone-shaped webs.

Three was a huge orb-weaver spider eating its prey under a little rock overhang. I was able to prop my arm against the rock and get a really good close-up of it. Check out those eyes and fangs! :)