Fall trees and a "canabilistic" snake!

On Sunday Kenny and I went to Big South Fork National River and Recreation Area (BSF) in Scott Co., TN. We wanted to see the fall trees but not fight the crowds we knew we'd hav

e in the Smokies. BSF is about 75 miles north west of Oak Ridge. Our first stop was the East Rim Overlook (left) for a gorgeous view of the Big South Fork of the Cumberland River in the gorge below. The drive down Leatherwood Ford Road (right) to the Angel Falls Overlook trail is steep (13% grade) and curvy with numerous hairpin

The 3.3 mile trail to the Angel Falls Overlook follows the river and passes through the forest where you'll see sandstone cliffs (left), streams, a few

wooden bridges and 2 backcountry campsites. The views of the Overlook from the river are worth getting off the trail to see (right). The first 2.5 miles are fairly easy until you pass the long bridge, then the trail climbs steadily up the side of the gorge. You'll walk under a rock overhang called a "rockhouse", then the trail goes through a sandstone ravine before coming o

ut on the top of the rim.

The Angel Falls Overlook is a large, flat sandstone outcropping with fabulous views of the river below. It is named for a set of rapids in the river that you can hear better than y

ou can see. It is not protected with any cables or rails, so it is not a good place to take small children or rambunctous dogs. To get out onto the cliff you have to cross over a narrow gap between the rocks, it is not a good place for those who are afraid of heights either! We enjoy looking for insects, spiders, lizards and snakes while we are up there. The warm rocks make a good basking area for the animals. I saw a small lizard, a spider with yellow legs, and a green katydid.

nats and a persistant yellow jacket wasp that wanted to share my food, Kenny began waving and whispering to get my attention. He had spot 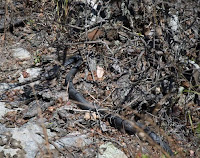 ted a 5-foot long black snake on the other side of the rock gap. We were about 10 feet away so we crossed over the gap to the trail to watch it from above. Suddenly, Kenny exclaimed, "It's got a snake in its mouth"! Unfortunately, I had not brought my telephoto lens because of weight limitations, so this was the best I could do. We watched the snake for an hour and were fascinated to watch it hunt. Its tongue flickered constantly as 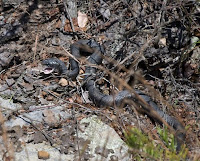 it searched for more food. Once it pushed over large piece of pine bark on the ground and pulled out a small black and white striped snake by the tail. It had a bit of trouble swallowing, it had to writhe around opening its mouth to get the live snake to go down! The snake eventually ate 3 little snakes as we watched it and it continued to hunt for more! I got a movie of it swallowing the little snake. I apologize for it being kind of shaky, but it was a bit tricky to film all this action because we were standing 2-1/2 feet from a sheer cliff and I we had gnats crawling on our faces, getting into our ears and occasionally biting us! It made me really appreciate wildlife photographers! :)
This has to be one of the most amazing things we've ever seen on our hikes! We were happy when other people came by on the trail so we could share it with them, but not everyone appreciated our enthusiasm for it! Ha!
Posted by Kris Light at 12:28 PM No comments: