Woo hoo, we survived winter! Happy 1st day of spring! What a glorious day it was here --- sunny, temperature in the low 70's and just a tad bit breezy. Kenny and I went to Norris Dam State Park, about 25 miles from Oak Ridge. There were people everywhere, even IN the river! Can you see 9 people in this photo? This just shows a small number of the fishermen who were taking advantage of the low water below the dam. We hiked on the Bluff Trail below the dam and I ran into one of my wildflower friends, Mika, who is even more enthusiastic than I am about wildflowers! I had to laugh when I learned later from a friend of hers on Facebook that her husband was one of the fishermen. When Mika and I got excited about something we saw (a pretty wildflower or cool fungus), he said the fishermen could hear every word we said! :-0

One of the other nice aspects of hiking is getting to meet nice folks, we met several people on the trail today and enjoyed talking to each one of them. I was surprised that two people knew who I was because they had been on my website! :)

Since we had such a hard, cold winter, a lot of the wildflowers I expected to see were not y

et in bloom. But a few of the really early bloomers were, some of the flowers we saw included: the tiny Harbinger of Spring (right), Sharp-lobed Hepatica (left), Toothwort, Carolina Spring Beauty (center), Bloodroot (left), and Spicebush. 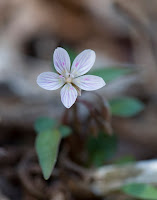 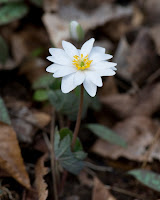 But the most amazing thing I saw today was the beautiful Scarlet Cup fungus. I got quite a surprise when I tried to gently blow a 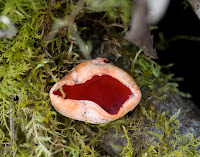 piece of dead leaf out of the cup before I photographed it. Seconds after I puffed into the fungus, it puffed back!!! Actually, it suddenly gave off a little cloud of spores! I had not touched it with my hands or a stick, just my breath. I'm assuming that it may give off its spores when the wind blows on it. Later when Mika saw this happen, she squealed with delight! I'm sure the fishermen got quite a kick out of that!

Even tree leaf buds can be interesting to observe. I noticed this pretty pink Buckeye bud just getting ready to open.

Anyone who has followed this blog in the past knows how much I like spiders! So, I was 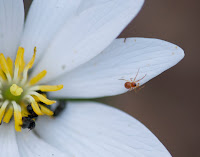 happy when I saw a tiny spider on a Bloodroot flower today! It was a little male (you can tell by his round pedipalps). I won't go into what they are for since this is a family-friendly blog! ;) The little black objects are beetles. We saw them on Hepatica flowers too. I can't wait to go out on the trail again! Keep checking back for wildflower bloom updates!
Posted by Kris Light at 10:27 PM 1 comment: 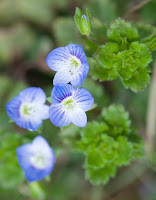 s the "blues" are not a bad thing! Today I had a good case of the blues --- a blue sky was seen for the first time in days and lots of blue wildflowers were blooming in the yard! :) The Birdseye Speedwell (Veronica persica) is blooming so profusely in some areas, it looks like puddles of water reflecting the sky! I found this plant blooming in the soccer field near my house (right). 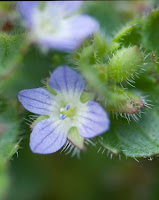 Not far off was another kind of speedwell, Ivy-leaf Speedwell (Veronica hederaefolia), it has more lavender-hued flowers (left). When I was a child, I was fascinated by the pretty flowers of Vinca (Vinca minor) that grew in the woods near my house (right). So, w

hen I moved into this house, I transplanted some from my old neighborhood in Nashville. Big mistake!!! It is an evergreen ground cover that can take over very quickly. I have to pull a lot of it up every year to keep it under control. It does have interesting flowers if you look at the center very closely. The 1-1/2" tall Small Bluets (Hedyotis crassifolia) are very easy to overlook (below). They bloom much earlier than the taller and more blue Quaker Ladies Bluets. 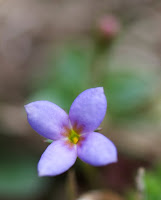 There is an old 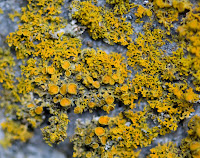 cemetery down the street. It is a fascinating place to do photography. I enjoy seeing the various lichens on the headstones. This yellow one, called Lemon Lichen (Candelaria concolor) is interesting to look at through my 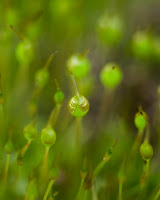 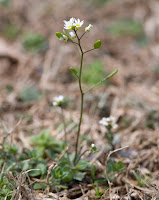 flowers caught my eye. These plants were only about 2" tall, I'm sure they are often stepped on and never even noticed! In warmer years, Whitlow Grass (Draba verna) often blooms in late February (left). Like many other plants in the Mustard Family, the flowers start making fruits even before the petals have fallen off the flowers. I 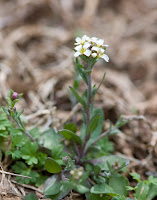 was surprised to see another species, Shortpod Whitlow Grass (Draba brachycarpa) blooming nearby (right). Like its "cousin," it too was only a couple of inches tall. It had clusters of much smaller flowers. I was excited to learn this was a new flower for my life-list! :) It is #2427 and my first new wildflower for 2010! I've lived in this neighborhood 29 years so I'm amazed I have never seen it before. That is what I love about exploring nature!

Posted by Kris Light at 9:43 PM No comments: 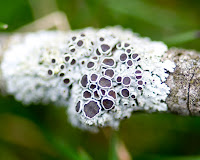 limbs that had fallen in the yard during the recent strong winds. As I was putting the limbs into the bucket to throw them out I noticed they had some interesting fungi and lichens on them, so I went inside and got my camera. It doesn't take much to mak 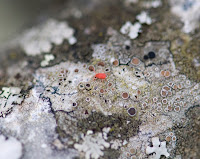 e my "ADD" kick in and get me off track! :) As I was picking up one limb, I noticed a tiny orange mite crawling across the surface. It is VERY difficult to get a decent photo of a 1mm critter that is in constant movement with a macro lens and no tripod! I like to challenge myself!

The maple trees are blooming, giving them a red hue. Thanks to the squirrels that like to bite the blooming twigs off, there 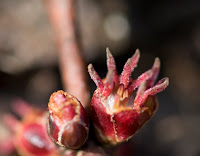 were several of them on the ground. It is hard to believe that in about another month or so these tiny red flowers will become the large green "helicopters" that twirl down from the trees in a strong breeze. These are the female parts of the flowers, the pistils. The male parts, the stamens, are just barely visible because they have not yet emerged. The two genders don't emerge on the same tree at the same time in order to prevent self-pollination.

. Today I noticed one that had become a "zombie", it had been torn from its roots, was upside down and the leaves were wilted, BUT the flower stems had turned upward and they were still blooming!!! A floral Twilight Zone! :-0 These little non-native weeds are awful, they have pods that pop and throw their seeds. They are on 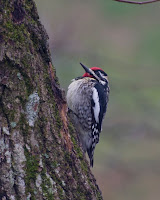 e of the first plants to bloom in the spring.

I was happy to see my bird buddy, the Yellow-bellied Sapsucker back at the suet feeder today! He is such a handsome guy. I hope he will find a "girlfriend" soon and establish a territory in the neighborhood.

Just as I was getting ready to go back in the house, I noticed at lethargic honeybee o

n one of my patio planters. I guess it was still a little cold for her. It gave me a chance to get some shots of her before she took off. It was interesting to see how hairy she is. It is easy to see how honeybees can be so efficient in spreading pollen. Note the little ovals on her abdomen, those are her spiracles, the breathing holes.

Pretty soon I should have some wildflower photos to put on here. But for now I have to get my "photography fix" anyway I can! :)
Posted by Kris Light at 7:26 PM No comments: