We spent Christmas with my parents in Milton, FL. The camillia bushes in their yard were blooming. This one is one of my favorites! We had a wonderful visit with most of my family, including my son Curtis and his girfriend Jeanie, who were in from California and my brother's family from west TN.

The Florida panhandle had received a lot of rain. There were lots of different kinds of fungi that popped up in the yard and along the roadsides. This weird Columned Stinkhorn (Clathrus columnatus) was growing next to a stepping stone in my mother's garden. These fungi have a strong, foul smell that attracts flies to the slimy, greenish-brown spore mass. The flies get the spores on their feet and spread them to other areas assisting the fungi in growing in new areas. We also found lots of mushrooms, earthstars and puffballs.


I was excited to see this Red-headed Woodpecker (Melanerpes erythrocephalus) when we went to Grassy Point, a nature preserve on East Bay (see map and zoom in on the lower arrow). My family spent a week on a houseboat at this area for 13 summers when I was growing up. I was delighted to learn that the area had been protected for wildlife. The woodpecker flew from a Live Oak tree with acorns it plucked from the branches, to a dead pine tree where it stored the seeds. 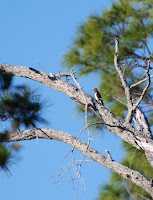 
Another adventure we had was when we went to Munson and hiked at the Blackwater River State Park (click on the little hiker symbol). It was an unusually warm December day and the cold-blooded critters were out. We saw numerous Brown Anoles (Anolis sagrei),

an Eastern Ribbon Snake (Thamnophis sauritus) which was too fast to photograph!

But best of all, we were amazed to see a beautiful little ~18" Eastern Diamondback Rattlesnake (Crotalus adamanteus)! It watched us as closely as we watched it. :) We got a kick out of watching it slowly move its tail back and forth. Since it had only 2 little buttons, it was not able to make the warning buzzing sound typical of larger rattlesnakes.

We thought it was appropriate that we saw Christmas Lichen on some of the oak trees that grew along the boardwalk. I was happy to find the tiny Sundews growing along the trail to show Jeanie. I put a metric ruler next to one to show how tiny these carnivorous plants can be! Notice the little sticky tentacles on the leaves, they attract and trap small insects which the plant will later digest. This plant measured ~1 centimeter (~1/2"), but there were others that were even smaller. 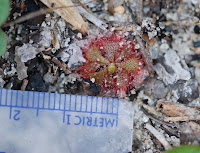