Our trip to Washington

We're back! Kenny and I just returned from a busy trip to Washington (as in "The State of"!). We flew into Seattle and covered over 1500 miles in 14 days. Our first day and a half was spent exploring the Seattle area --- downtown and some of the local parks. The city has many nice parks for walking, hiking, biking, boating and even swimming. We did the "tourist thing" in Seattle for a couple of hours fighting the crowds at Pike Place and watched the guys throw the fish at the market. We got a kick out of some of the shops, one sold "utility kilts" for men, I wonder how many real men would wear those!? (right) We saw some strange modes of attire, tattoos and various body piercings in Seattle, but no men wearing these!
Neither of us are "city people", so we were ready to get out away from the city after a couple of hours. Our first stop was Samammish State Park (there are lots of interesting Native American names in that area!). We enjoyed walking the trails there and taking photos. Next, we went to Snoqualmie Falls, 30 or so miles east of Seattle on I-90. We met a young man who let us sample a piece of Licorice Fern stem he took from a tree. It was surprisingly sweet!
That evening we drove back to Seattle and met our son, Curtis, and his girlfriend, Jeanie, at the airport, they flew in from San Jose, CA. On

Friday morning we drove north through intermittent rain up to Anacortes to meet her parents at the ferry to Orcas Island. The ride through the islands of Puget Sound was beautiful! We all stayed at the West Beach Resort on the island. That night at dinner Curtis made an exciting announcement, he told us that he and Jeanie recently got engaged! We are thrilled that she will be an "official" member of our family. No date for the wedding has been set yet, but it will probably be sometime next year. This photo was taken on the dock after dinner (it was a bit breezy!).

On Sunday afternoon we had to say goodbye to Curtis, Jeanie, and her parents Carol and Eldon and we drove down to Ashford, WA just east of Mt. Rainier. We spent 4 days in that area. We stayed in a litt

le cabin at the Mounthaven Resort, located on 7 acres of wooded 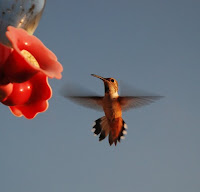 land inhabited by Black-tailed deer and lots of interesting birds. I enjoyed walking the grounds each morning and watching the Rufous hummingbirds at the feeders next to the office. There are two creeks and a couple of wildflower-laden meadows to explore.
Our first day at Mt. Rainier was cloudy and quite cool, it never got above 45 degrees (F) that day. Since we couldn't see the mountain, we stayed in the lower areas of the park and hiked. We amused ourselves by looking at wildflowers, volcanic rocks in the river and even playing with lichens that fell from the trees in the previous day's hailstorm. That's me with Old Man's Beard lichen!

The weather improved dramatically the next day, we got spectacular views of Mt. Rainier. We walked on a trail above Paradise through slushy snow, it still has about another month before the

alpine wildflowers will carpet the meadows below the mountain. There were a few mountain heather, Pasqueflower and Indian Paintbrush flowers blooming in one snow-free patch at ~6000 ft. I enjoyed using my telephoto lens to look at the glaciers on the top and sides of the mountain. It is hard to believe that Mt. Rainier is considered one of the most dangerous mountains in the Cascade Range. It is a "sleeping giant" volcano that could erupt with catastrophic consequences. I really enjoyed learning about the geology of the area.
The next day we saw an amazing sight along the highway in the mid-level section of the park. While I was 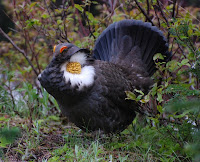 photographing Shooting Stars and Marsh Meadowgold flowers, I heard an odd, low-frequency "whump, whump" sound. Finally I saw something gray moving in the shrubs on the other side of the road. I realized it was a Blue Grouse putting on a mating display! He would spread his tail and puff up his neck feathers to show off the golden patches to attract the attention of a nearby female. He had only one thing on his mind and totally ignored us as we watched in awe! We didn't know if he "got his girl" or not, she never showed herself if she was around.

The highway past Box Canyon was closed due to road repairs, so we didn't get to see as much of the park as we had hoped. But the views from

that part of the road was incredible. This was where we got to see some very pretty patches of flowers along the road.
The next day was cloudy, so we hiked on the Rampart Ridge trail near Longmire. It was a 5-mile loop that started out in old-growth forest. As we walke

d along one of the many switchbacks, I suddenly yelled, "There's a Candystick!" It is a beautiful red and white striped saprophytic wildflower that gets its nutrients from decaying vegetable material. It is ia plant that I have wanted to see for years. We also saw saprophytic orchids, such as the Western and Striped Coralroots. Other orchids I found include two Twayblades and a green Bog Orchid. The ranger at the entrance booth had told us we would not see any wildflowers blooming since we were too early. Well, I proved him wrong! By the end of the four days we spent in the park, Ihad documented over 8

0!
Our next stop was Mount Saint Helens, the volcano that blew off its top 1300' on May 18, 1980. We got lucky again and had a great view of the mountain. I was glad, it is a 40-mile drive to the visitor center at Johnston's Ridge. It is an amazing place to visit. It is hard to imagine the unbelievable devastation that was unleashed when the north flank of the volcano slid and then blew out. Life is slowly returning to the slopes, but even after 29 years, the area in the blast zone still has little plant life. The ridge was once blanketed with forests of huge trees which were

completely blown away in the eruption. Even the topsoil was obliterated in the "wind of rock" as the pyroclastic flow has been called. We wanted to hike to Spirit Lake and got a good start until we encountered the "Devil's Elbow", a section of the trail that is about 1' wide in parts and drops down to what looks like 1000'! That was a little too much for us to try, especially since I was top-heavy with 20+ pounds of camera equip

ment on my back! Kenny is walking on the left in this photo, this was taken before it got really narrow!
We drove to Long Beach on the Pacific coast of Washington one day and visited the Lewis and Clark Interpretive Center. It was amazing what an ordeal those guys and Sacajawea went through to reach the Pacific (and we think a 6 - 7 hour plane trip is tough!).
On Friday we drove south to the Columbia River Gorge, a place I have long wanted to visit. The now-dammed river once cut unimpeded thorough the Cascade Mountains to form the spectacular gorge. We found a place on the map called Beacon Rock State Park which has the core of an ancient volcano which is "the rock". There is a nice 1/2-mile trail that goes to the top, giving the hiker an incredible view of the gorge below. Click on the photo to enlarge it, you may be able to see the railing of the trail near the top. It is not as hard or scary as it looks!

Farther down Hwy. 14 on the Washington side, we visited the Bonneville Dam, the last of several dams on the Columbia River. It has a fish ladder to allow spawning salmon and other fish to swim upstream unimpeded by the dam. We saw salmon, trout and even some Pacific Lampreys. Those are the freakiest fish, they have a round mouth loaded with sharp teeth used for taking blood from large fish. This picture was taken through 2"-thick glass and the water was green and murky, so it isn't a great photo when it is enlarged.
We also took a side tr

ip to a fish hatchery (which closed just as we arrived!) and later on the Oregon side of the river we got spectacular views of Mt. Hood, another beautiful volcano in the Cascade Range.
We stayed at the Silver Lake Resort in the community of Silver Lake. It is a fishing resort with camping areas and a motel. We had a motel room that looks out over Silver Lake (a remna 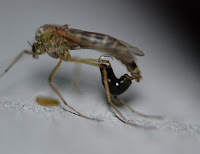 nt of an eruption of Mt. Saint Helens eons ago). It was fun to watch the Barn and Tree Swallows chasing insects during the day and bats swooping over the lake at night. Every evening midges, harmless flies that look like large mosquitoes, would line up on the balcony. The gave off a brown liquid from their abdomen that I can only assume would be used for mating later. I've posted a question about it to the Bugguide.com site in hopes of finding an answer to this mystery.
It was a great trip, we saw a lot and learned a lot. I'll soon have photos of the trip posted on my website.
Posted by Kris Light at 1:09 PM No comments: