I'm a week behind on this! It has been a busy week! Last Sunday Kenny and I decided to take advantage of the beautiful fall weather and go hiking. We drove south and went to

the Laurel - Snow Pocket Wilderness, one of Tennessee's State Natural Areas near Dayton, TN. Since we had hiked up to Laurel Falls many times, we decided to go to Snow Falls. The beginning of the trail from the parking lot follows an old railroad bed that was used to remove coal dug from the small mines in the hillside. I'm surprised the mine entrance (right) has not been blocked by the state, old mines are very dangerous.


We saw some pretty fall co 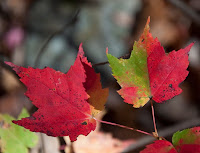 lors along the way, including these Red Maple leaves. I liked this half-red, half-green leaf!
One thing I saw along the trail really irr

itated me, I HATE it when inconsiderate people spray paint graffitti on anything, but ESPECIALLY on the beautiful rocks along the trails! I wonder how the person who vandalized this cliff with religious graffitti would feel if someone came into his or her church and wrote environmental messages on the walls!? I hope it wasn't a student from nearby Bryan College in Dayton (from the Stokes Monkey Trial fame), they should know better!

Parts of the trail are very rocky. There are some of the biggest boulders in the creek that I have ever seen, some are the size of a small house! I turned on the camera as we walked over one rocky part of the trail. I didn't realize how much noise I make when I walk through the leaves and over the rocks, I sound like a pack horse!

The trail to Snow Falls eventually crosses the creek by way of a 150-ft. bridge over some of those huge boulders. The first boulder has posts with cables and grooves cut into the rock to make walking on it a bit safer. I'd love to know how the trail crews got those long pieces of railing back there!

From this point, the trail took a steep turn up the sid 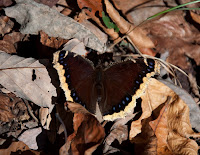 e of the gorge. It was approximately 1 mile of 8 switchbacks to gain 700 feet in elevation

! As we hiked along the trail Kenny suddenly stopped and motioned for me to come up to him quietly. At first I couldn't see what he was pointing at, finally I saw a beautiful Mourning Cloak butterfly resting in the leaves. They are quite shy creatures, so I was surprised to be able to get so close to it.

After hiking up and up and

up over several boulder fields such as the one on the right, we finally made it to the rim of the gorge. The trail has lots of white trail blazes painted on the trees

, but at the top some were painted on the bare rock. Just past the powerlines, we were rewarded with a fabulous view of where we had hiked. I've drawn a rough sketch of the trail in red. From here, we still had about another 1/2-mile to go to reach Snow Falls.

This area was once owned by the Bowater Paper company. The upper parts had been logged, the more inaccessable sides of the gorge had not. It was obvious that we were walki

ng in a younger, second-growth forest up on top. After crossing a dirt road that led to a clearcut area, the trail came to another creek. Fortun

ately, the water was low enough that we could easily walk across it. Finally, the trail started losing elevation and we could hear falling water, we knew we were getting close to Snow Falls! We could not find a trail to go to the bottom of the falls, so we had to stay at the top. I hung on to a tree to get out far enough to take this photo!

After a picnic lunch, we packed up and hiked the 3 miles back to the car. It was a strenuous hike, but we were glad we did it!