Kenny and I went to visit my parents in northwest Florida last week. Wow, we've been from one corner of the 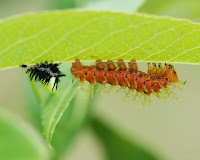 country to the other in a month! I always enjoy seeing the creatures and plants they have in their yard. The Passionflower vines have lots of activity with ants, butterflies, caterpillars, spiders, bees and wasps. The Gulf Fritillary butterflies lay their eggs on the tendrils and leaves of the vine (left). The bright orange and black-spiked caterpillars eat the plant. I was excited to find this caterpillar that had just shed its 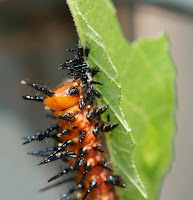 skin (right). Notice how the spikes have not yet turned black, the old skin is discarded like a wadded up sock behind it. But that skin will not go to waste, as I found out later. It contains needed protein, so the caterpillar eats the skin later. Enlarge this photo by clicking on it and look at the tiny compound eyes and the oval-shaped spiracles (breathing holes) on its side. 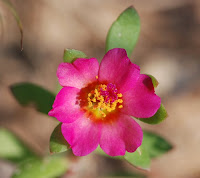 I found some pretty wildflowers in my parents' neighborhood when we went on our morning walks. One of my favorites is the little magenta flower called Kiss-Me-Quick that grows in their yard. My guess is that it gets its name due to the fact they close in the afternoon, you have to enjoy them early in the day. Another interesting flower is the Butterfly Pea that grew on the wire fence. I 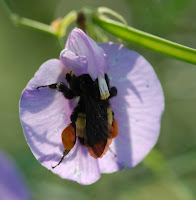 was surprised to see the anthers pop out of the petals when the bumblebees came to drink nectar from the flowers. Note the large pollen baskets on the bee's hind legs.

On our last day, we went to Navarre Beach, about 20 miles from where my parents live. We were happy to see that the Gulf Shores National Seashore was finally open, it had been closed since Hurricane Dennis in 2005. There weren't many seashells, but we did see a few sea birds and some Ghost Crabs. I

had to stand very still to keep from scaring the crabs as they emerged from their holes in the sand.
Kenny had said he hoped we would see a thunderstorm out over the Gulf of Mexico. It is beautiful to watch the lightning far in the distance as it ligh

ts up the clouds. We noticed an interesting squall line out on the horizon with rain and occasional lightning. It is difficult to judge distance of clouds over the ocean. Before we knew it, the lightning was getting a bit too close for comfort. We headed back to the car, but the storm caught up with us before we could get off the island. Since the sand dunes were wiped away during the last hurricane, there aren't any barriers to slow the wind. Our car was blasted by sand that blew across the road. When the rain started we had to pull off the road, we didn't want to go across the bridge in those conditions. I teased Kenny to watch out what he wishes for the next time, he just may get it!
Posted by Kris Light at 8:42 PM No comments: