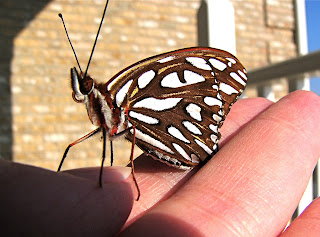 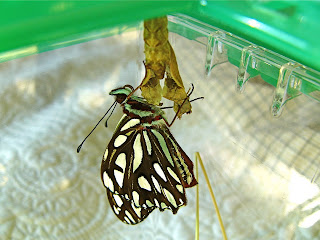 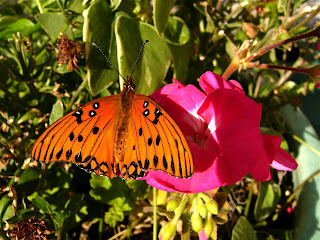 I was so excited to find another butterfly had emerged in my bug cage. This one is a Gulf Fritillary. I was glad it was a warm day today as I watched it to fly off towards the sun.
Posted by DSP at 4:19 PM No comments:

Kenny and I decided to go to Frozen Head State Park on Nov. 16 to see the trees one more time before winter sets in for good. It was a chilly day, the first time we've had to don our longjohns this season! The 1" of rain we received in our area on the previous Friday night didn't do a lot to help the water level in Flat Fork Creek. We had hoped the waterfalls would be running at a good pace, but they weren't.

Most of the trees had already shed and left a carpet of multicolored leaves on the trail. I especially liked the red maple and yellow poplar leaves. Some of the poplar leaves had drops of water on them, I got this shot of one on the bridge with the sun shining through the drops. Notice how the drops magnify the leaf below them. This is another "thinking outside the box" photos. I'm trying to branch out a bit from wildflowers, insects and spiders! 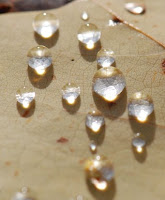 As we hiked we enjoyed seeing the beautiful white Sycamore branches shining behind the red maple leaves. These trees were called "Ghost Trees" by the Native Americans due to their ghostly white branches. These trees grew along the creek.

We ate lunch up at Emory Gap Falls. It was pretty "anemic" too!

As we were leaving the park Kenny saw an animal run across the road in front of our car. We were amazed to see a small, dark brown Bobcat! Unfortunately, I wasn't able to change my lens on the camera fast enough to photograph it. Travis, one of the rangers, stopped his truck and watched it with us as it ambled up the hill into the forest. As we were talking I heard a strange sound of some kind of bird. As we listened more closely, I suddenly realized we were hearing Sandhill Cranes! We looked up and saw a large flock flying in a very strung out "V" formation. Most likely they are on their way to their wintering grounds in Hiwassee. As we left the park we saw a small herd of White-tail does in a field.

Posted by Kris Light at 5:04 PM No comments: