A new friend and some exciting finds

One of the added benefits of having my website is that I have been contacted by hundreds of people who are as interested in nature as I am. Many of them have found my website doing searches for flowers, insects, spiders, mushrooms, etc. and they will write e-mails with questions or comments. I always try to write back and occasionally there will be a dialog between us for a while. Occasionally I have run into people on the hiking trails around here who have been on my site. Today I went to visit a new friend, Michelle, who contacted me last year after visiting the site. She came to the Arboretum hike last Saturday and invited me to come see the wildflowers on her property in Marlow (in Anderson Co. TN). She and her husband live on 20+ acres of land along with several chickens, 10 dogs, some cats, 3 horses, and Radar, the donkey. Quite an interesting menagerie! :)

y has many different habitat types with pasture, unmowed fields, wetland areas, a large creek, and a small forest. Some of the wildflowers we sa 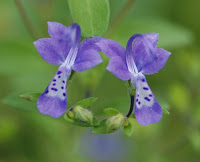 w include: Cardinal Flower (left), Great Lobelia, Ditch Stonecrop, Boneset, Joe Pye Weed, various Goldenrods, Mistflower, Tear Thumb, Blue Curls (right), Yellow Crownbeard, Wingstem, Orange Jewelweed, Arrowhead, Ironweed, one of the Thoroughworts, Asiatic Dayflower, Peppermint, Maryland Meadow Beauty and Elephant Foot (below). The upper part of the meadow was full of Blue Curls, I had a great time photographing them! I would love to know how Elephant Foot got its name, someone had a great imagination when they came up with that one! 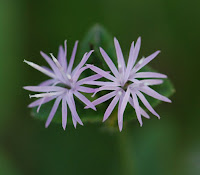 We enjoyed watching the Ruby-throated Hummingbirds squabbling over the Jewelweed flowers in the meadow and the woods. I wanted to get a picture so badly, but they just wouldn't cooperate. You'd think that with all the thousands of flowers there were they could all find a place to eat in peace! But that's not the nature of hummingbirds, they are highly territorial and will quickly chase off any rival birds.

Tear Thumb comes by its name honestly, it has rows of thousands of tiny curved prickles that co 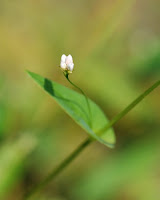 uld rip a gash in your hand if you rubbed against it the wrong way!

It is a wetland plant that is related to Smartweed.

Of course there were some interesting spiders and insects on the flowers. I especially liked the little Ambush Bug nymph. They are so ugly they are cute! :) There were several crab spiders hiding among the flowers too. I sh 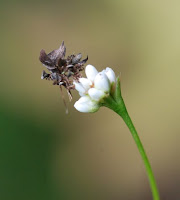 k. Had I not known what it was, I would have never noticed it.


On our foray through the woods behind the horse barn we found some pretty coral fungi and mushrooms. Later I found s 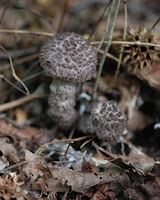 mushrooms. The Beech trees had many Beechdrops, a parasitic plant that takes nutrients from the roots.

A blackberry vine had leaves that were covered with Wooly Apple Aphids, very strange little insects that cover themselves with a stringy, 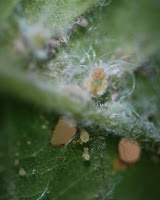 white waxy substance. Click on the photo to enlarge it, the smaller nymphs below the leaf vein will be easier to see. The adult aphids have

clear wings with brown stripes. Later she showed me a large, hollow gall on a smooth sumac leaf. It was open at the top, so I assumed whatever lived in it had either left or was getting ready to leave. I wasn't sure what I would find inside, but I opened it up and was ama

zed to see hundreds of tiny black aphids and the white, cottony remains of their nymph skins. Nature never ceases to amaze me!

I really enjoyed my visit with Michelle despite getting scratched and grabbed by blackberry vines, wild rose bushes and other unfriendly plants as we wandered around the property!
Posted by Kris Light at 7:46 PM 1 comment: