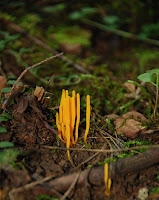 Kenny and I went to Tremont (the Smoky Mountain Field School) on Wednesday and Thursday this past week to teach college students from the University of Georgia and Purdue about our local forests and understory plants. We found some beautiful fungi thanks to all the rain we have had lately. Some of the coral fungi were gold, others were white.
My favorite had to be the flat, bright orange
Eyelash fungus. They have little black "hairs" at the edges that do look like eyelashes!

After one walk, we stopped by the snake 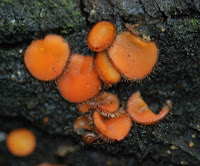 tins in the field t

o see if there were any occupants. Much to everyone's delight there was a beautiful Copperhead lounging under the first one we looked under! If it doesn't freak you out too much to look at snakes, check out the banding pattern and vertical pupils on this guy.

We spent the night at a motel in nearby Townsend. The next 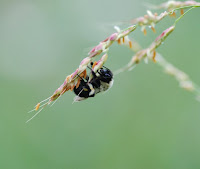 morning I went out to a field and looked for spiderw 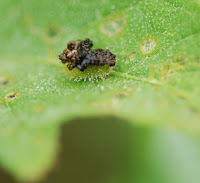 ebs. I didn't have much luck finding dew-covered webs, but the other things I found made up for that! Have you ever wondered where bees sleep? I found some bumblebees sleeping on tall flower heads of grass in the field. But the strangest, most interesting insect I found was a beetle larva that had covered itself with its own feces! How is that for a predator deterrent? :) It may be a Tortoise Beetle larva. 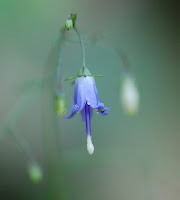 There weren't many wildflowers blooming in the woods, but I did find a few. One of my favorite summertime woodland flowers is the Southern Harebell. The pretty little flowers hang down from the stem like small blue bells and the petals curl up on t

On the second day we went on a hike in a different area. The students were delighted that it ended at Spruce Flats Falls, where many of them took a dip under the falls. They also enjoyed looking for salamanders (below) since they had learned about them in a class earlier that morning. Some students were very good at spotting them in the creek. I hope to get the opportunity to work with the classes again next year. It is an interesting change to teach college students after working with elementary students for the past 22 years!

Posted by Kris Light at 9:46 PM No comments: