What a difference less than a week can make! Just 5 days ago we were shivering through morning temperatures in the low teens, today it got up to 64 degrees! I just hope the trees and plants aren't fooled into sprouting early and then getting nipped in March or April.

Today we took the spotting scope out to the lake, I wanted to try it out in the field instead of just using it in my living room! The ducks, geese and coots were swimming close to the bank, so I was able to get some pretty good shots with the scope and my camera. It is a lot harder to photograph "moving targets" than the birds on the feeder. These birds didn't stay still for very long, I had to constantly focus the scope. The coots are such comical birds with their red eyes, white beaks and weird, webbed toes and their strange sounds. I enjoyed watching them eat, dive, and squabble with each other.


There are lots of Mallard ducks, Moscovy ducks and Canada Geese out there. The city has put up signs asking people not to feed the waterfowl, so the birds are having to fend for themselves. Actually, that is a lot better for them than eating white bread, french fries, and other human food (some of which humans shouldn't eat either!).

Our next stop was a half-mile drive up the hill overlooking the river to see if the Great Blue Herons were roosting. Sure enough, when I looked in the sycamore tree on the island in the middle of the river, there were 2 herons on their nests. One was standing and preening. There are several nests in the tree, in a few weeks there will be lots of birds to look at! The birds have their breeding plumage now, so they have long, wispy feathers that they don't have during the summer. This photo was taken at about 50 yards, so it is not as sharp as the ones I took of the birds at the marina. Oh well, at least it is better than my attempts with my 300mm telephoto lens a couple of years ago! 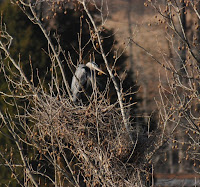 Great Blue Heron on nest
Posted by Kris Light at 9:23 PM No comments: