Well, Kenny and I are back from our 2-week trip to northern Arizona, Nevada and California. It was an exciting vacation, full of wildflowers, hiking (about 12 miles worth) and lots of adventure 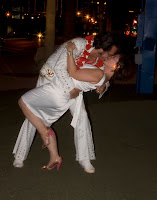 s. We flew into Las Vegas, NV, simply because it was the closest airport to the Grand Canyon and Flagstaff. Kenny's brother, Gordon, was flying out of Vegas the next day, so we got to spend some time with him. He showed us around the Strip and we got our "obligatory" picture next to the welcome sign. Since it was a Friday night, there were lots of interesting people out on the streets. We even saw Elvis kissing a new bride! I couldn't resist snapping a picture!
On Saturday we went to Hoover D

am and did the short (and less expensive) tour. It was quite hot (110 degrees F) when we got outside on the observation deck, we teased that it was "dam hot"! :) The dam is very impressive. I was surprised at how clear the water in Lake Mead was, considering it had to go through the Grand Canyon. The new bri

dge in the background is supposed to be finished by the end of October. It will be very nice for travelers not to have to go through a security checkpoint, which has to be done when vehicles go over the dam now. It will also open the road to busses, large trucks and rental trucks that were banned after 9-11-01. After touring the dam we drove along Lake Mead and ended up at Valley of Fire State Park. One of the red sandstone formations in the park is called Elephant Rock.
The ne

xt day Kenny and I drove to Death Valley National Park in southeast California. It is very dry and barren, but beautiful in its own way. Our first stop was Dante's View, one mile above the valley. We had a spectacula

r view of the saltflats and the mountains on the opposite side. The colors of the rocks was incredible. Zabriski Point (left) was an amazing area, but at 114 degrees, we didn't stay long! The farther down we drove, the hotter it got. When we reached Badwater Basin, the lowest elevation in North America at 282 feet below sea level, the temperature had soared

to 119 degrees! Since it was quite windy, it felt as though we were being blown with hair dryers! I know what they say, it is a "dry" heat... but it is STILL HOT! I could feel the moisture being sucked out of me, I was never without a bottle of water. One of the interesting areas that we v

isited was the Devil's Golf Course (left), a jagged salt flat that would have been impossible to walk across much less play golf on! I was amazed when some German students stopped there and walked around on the sharp blocks with flipflops! I enjoyed looking at the delicate, hair-like salt crystals between the chunks (right).
On M

onday we drove to the Grand Canyon. It was a pleasant change to get into the cooler pine forests and grasslands after being in the brown, dry deserts of Nevada and California. Since we got there late in the afternoon we got to enjoy the beautiful canyon views at sunset. The shadows made the rock formations even more spectacular! The next day Kenny and I hiked the Hermit Trail. Little did we know it is one of th

e most difficult trails in the park! We hiked down 3 miles to Santa Maria Spring. Going down was not a problem even though it entailed a 1700+ foot elevation change. We enjoyed seeing a large boulder balanced on the edge of a cliff. It looked like it could fall at any time! We both took nearly a gallon of water with us, I felt like a packhorse! The trip back up was grueling due to the heat, the lousy condition of the trail and the fact there was very little shade. It took almost twice as long to get up as it did to go down. But once we made it back to the top, we were glad we had done it. Hiking a trail in the Grand Canyon had been one of the things on my "bucket list"!
On

Wednesday I checked off another bucket list activity. I took a helicopter flight over the canyon! It was my first time to fly in a helicopter. LuckilyI got placed in the front next to the window, otherwise I probably wouldn't have had such a good seat. We flew about 300 feet off the ground along the rim. It was so amazing to go over the edge of the South Rim and see the canyon open up below us! Here is a movie I took as we did just that:

at the gorgeous stands of sunflowers that blanketed the fields and roadsides around Flagstaff, I had to use them as the foreground in this shot of Sunset Crater. This was one of the days that w

e endured 25 - 30 mph sustained winds, so my wildflower photography suffered! At 1000 years old, Sunset Crater, is the newest of the 600+ volcanoes in the northern AZ area. Even though it had been that long since it erupted, the lava flows were still jagged and sharp and the ashfall looked like black snow.

We didn't see many animals on the trip other than a few lizards, but one animal we did see was quite a thrill. Near Hoover Dam at Lake Mead, there is a herd of Desert Bighorn Sheep.

These endangered animals have found a great food source in a nearby park where there is irrigated green grass. They have become quite a tourist attraction since they are so easy to see and photograph. Unlike deer (which have antlers, not horns), the female sheep have horns, they just don't get as large as the males'. It was 106 degrees when we were in the picnic shelter, the sheep spent a lot of time in the shade of the trees and sometimes would even walk through the shelter with us! We saw a couple of Jackrabbits and several Desert Cottontail rabbits there too.

On our last night we stayed at the Paris Hotel in Las Vegas. We are not casino or city people, so it was not our favorite part of the trip. But, I guess everone should see Vegas once for the experience. I hated having to go through the smoky casinos when we walked through the hotel. It is amazing what people will do to make money in that city, besides Elvis, we also saw Michael Jackson, the Avitar characters, showgirl "wannabees" and Edward Sissorhands! We did enjoy seeing the beautiful fountains at the Bellagio, which was right across LV Blvd. They were even more spectacular at night:

So, that's our trip in a nutshell! I'll get more on my website as soon as I can.