A backlog of photos! 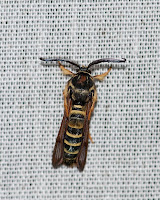 We finally got our PC back! :) Now, where to start with the photos!? I guess I'll begin with the 2 cool moths I photographed over the past couple of weeks. The first one looks surprisingly like a Yellowjacket wasp. Kenny spotted it on the sheet when he went outside one evening. I've trained him well! ;) This is a Raspberry Crown 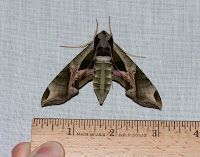 Borer moth, it may look like a wasp, but it doesn't sting.
The other moth is a Pandorus Sphinx moth. It was striking with its olive green and tan wings. I was thrilled to see it on the back side of the sheet. Kenny put a ruler below it and we were surprised to see it had a 3" wingspan. 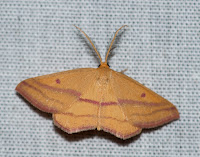 Other recent moths include this Chickweed Geometer moth. I liked the pink lines and spots. Sometimes some really strange insects visit the blacklight. Planthoppers and leafhoppers can be very bizarre (right)!

One weekend I went to Conasauga Falls, near Tellico Plains, with my friends Charlie and Roseanne. The weather has been dry, so the falls didn't have as much water as we had hoped. But they were still pretty.

The next weekend Kenny and I went hiking at Frozen Head State Park with our friends Steve and Nancy (from southern California). We were dismayed to see such a tiny trickle of water at DeBord Falls.
We were even more dismayed when we hiked up to Emory Gap Falls. Kenny was the first to reach the base of the fall

s and he said, "Something looks different here. Do you remember these rocks being here?" It took a

couple of minutes to register that the huge boulders we saw in the plunge pool had not been there the last time we had been up there in the spring! This freshly-broken piece of sandstone was at the base of the falls. It is a scary thought to realize these tons of rock had fallen so recently!

Last Friday we went to Cataloochee on the North Carolina side of the Smokies to see the elk. It was good to see that old #2 was doing better, he was quite sick this time last year. He has b

een pushed aside and lost his rank to a much younger bull. He is still interested in the ladies, but his mating days are over now, all he can do it "think about it"! The dominant bull is not tagged or collared, he is quite a handsome fellow! We had some excitement when this guy spotted a rival male trying to make a move on his harem, they had quite a sparring match!
Posted by Kris Light at 5:36 PM 1 comment: