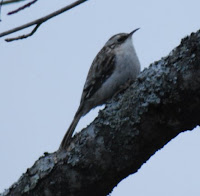 I was excited to see this little Brown Creeper (Certhia americana) on the tree behind our house this afternoon. I was even more excited when it finally stopped moving long enough to get a fairly decent shot of it through my spotting scope. The drab afternoon light was not very conducive to picture taking, so maybe I'll get another chance under better conditions soon! But for now, this photo will have to do.
Posted by Kris Light at 5:02 PM No comments:

I have wanted to see Bald River Falls in the Cherokee National Forest frozen for a long time. Since it takes a few days of below-freezing days for that to happen, I've had to wait for a while. Everything came together today to give us the opportunity to go see them. The temperature was 6 degrees (F) this morning and the high was supposed to be in the mid-20's. Kenny was off today and my classes were cancelled, so we decided to bundle up and head to Tellico Plains. Due to the recent rains there was a lot of water going over the falls. The spray froze on the nearby trees to coat them in rime ice. Several other people came to enjoy the sight including a couple of local bikers, one told me he had seen the falls "plumb froze" before :). That would really be a spectacle to behold! Kenny spotted a river otter scramble across the ice and into the pool below the falls... but I missed it! :( Earlier I had seen a small brown bird hopping across the rocks of the cliff near the falls, it was a Winter Wren. Unfortunately, it was in heavy shade and moving quickly so I couldn't get a good photo.

A little later we went on up the road a little ways to get photos of Baby Falls. We were stunned to see two kayakers going over the falls in such frigid weather! It seems like their faces would have frozen. That sure doesn't look like fun to me! I had on 2 pairs of thin gloves so I could take photos (ski gloves are just too thick) and my fingers were very cold dry, I just can't imagine getting wet in those sub-freezing temperatures. If you can stay dry and reasonably warm, winter outings are a lot of fun!
Posted by Kris Light at 6:24 PM No comments:

The White Blue Jay is back! 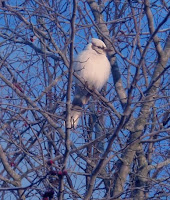 I was thrilled to see the leucistic Blue Jay out in the Secret Garden at my school this morning! This is the 3rd or 4th year that we have enjoyed this beautiful bird. Unfortunately, I just had my little pocket camera, digital zoom isn't quite the same quality as my 300mm Nikon telephoto lens. I'll have to take that camera to school soon.

This bird is not an albino, it does have some light black markings and a tiny bit of blue on the wing feathers. It is amazing that it has survived so many years, many times oddly-colored birds don't survive.
Posted by Kris Light at 5:02 PM 1 comment: