Happy 4th of July and a beautiful night visitor 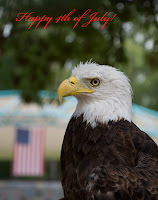 Happy 4th of July! I hope everyone has a safe and fun holiday as you celebrate the independence of our great country! I photographed this handsome eagle at the Oak Ridge Secret City Festival a couple of weeks ago. It was fortunate to have the American flag in the background!

Last night while I was out on the carport photographing moths, I had an amazing insect fly in. It had long wings (2-1/2" each!) and looked like a dragonfly moving in slow-motion. I grabbed m

y net and caught it in a jar. Fortunately, it cooperated with me and it stayed on the sheet. That was probably where it 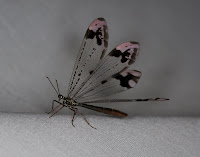 was going in the first place, but I got too excited and didn't want to take a chance that it might fly away. It is an antlion (Glenurus gratus), the adult version of a "doodlebug" (the little larvae that make the pits in the soil and eat ants). What a treat it was to see this fantastic insect!
Posted by Kris Light at 8:29 AM No comments:

I had set a goal of photographing and identifying 100 moths by the end of June. The photographing part is easy, I have well over 100; the ID'ing part is not always so easy. There are over 11,000 species of moths in North America, so it takes a lot of time and patience to match up my photos with the on-line guides! The numbers by the moth names are called Hodges numbers, they are a catalog listing number that helps tremendously in verifying the moths.

Last night 2 of the slu 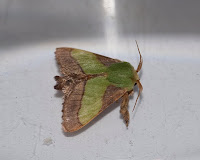 g moths came through for me to help me reach my goal! First I spotted the pretty green one, a Smaller Parasa #4698 Parasa chloris sitting on the ceiling of the carport. I moved it so I could get a better photo, it is really hard to take a picture of a moth straight over my head! The second one was a

Shagreened Slug Moth #4669 Apoda biguttata, that one made my goal --- #100! The moths in this group often hold their abdomens up above their wings, it gives them a strange effect! They get the "slug" designation from their slug-like caterpillars. 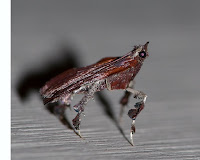 is next one falls into the "truth is stranger than fiction" category! It is called a Boxwood Leaftier Moth. They are so weird looking! We do have several Boxwood shrubs in front of our house, I guess I need to look and see if there are any caterpillars tying the leaves! :) 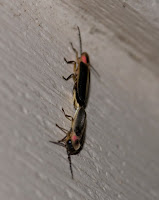 As I was looking at this weird moth, I noticed a pair of fireflies mating on the wall. They were "tail to tail", I guess if he was ugly, she didn't have to look at him! ;) I wondered why they didn't have their "close encounter" in the grass instead of high on the wall of the house! The fireflies weren't the only beetles I saw, 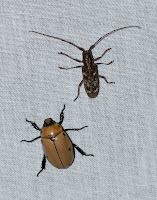 there was a large gold one and a longhorned one next to each other on the sheet. It can be pretty intimidating when these big things fly around near my head! :-0

Check out the cool antennae on this male mosquito! They use them to detect the hum of the wings of the 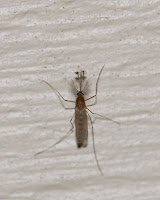 females. If you want to know what that sounds like, just listen to a high C tuning fork that has been tapped, the frequency is the same, 512 times / sec.!

Every night brings something new to the carport! It is fun to go out each night and see who comes for a visit!
Posted by Kris Light at 2:33 PM No comments: 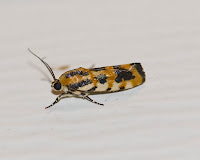 After some frustrating results with blurry photos, I sent out a request to the TN Moth group (yes, there really is such 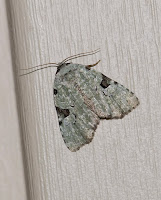 a group!) and asked for recommendations for better macro shots. Many people responded with lots of good suggestions. I used a head lamp to help see to focus better and then set my camera on f/10 @ 1/2000 sec. and got great results, even hand-held! The moth on the left is a Common Spragueia and the one on the right is a Green Leuconycta if anyone is interested! :)

I got a kick out of 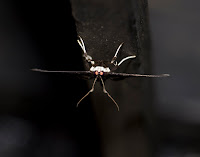 this one that was on the railing near the garbage can! No, it 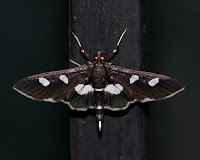 wasn't posessed, the eyeshine just makes it look that way! :) Here is a front shot (right). I think it is a Grapeleaf Roller Moth, there is another one that looks a lot like this one, so I'm not sure. I'm still in the "larval" phase of moth identification, it is much more difficult than I expected.

I had a couple of surprise visitors too. This beautiful G 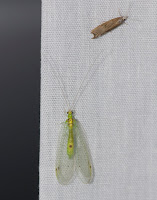 reen Lacewing was on the back side of the sheet, I almost missed it. I don't think I'd hang around too long if I was that moth, Lacewings are quite voracious predators of insects! 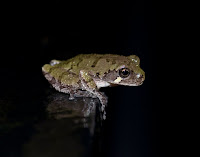 treefrog that I spotted on the rail at the side of the house. Because it was in a dark area I almost missed it too! It was quite patient with me! :) I love to hear these little frogs call at night, they sound a lot like birds chirping. I guess tonight's rain brought him out, the sight of so many insects on the porch probably helped too. I just wish it would eat those darned little brown June beetles!
Posted by Kris Light at 10:35 AM No comments:

A "Zebra" saves the night!

Last night was the worst I've had since I started photographing moths with the black light at the beginning of this month. I had wasps, click beetles, stag beetles, fireflies, winged ants, and leafhoppers but very few moths. Most of those were micros or ones I already had. Those @%$*&! little brown May Beetles drove me crazy, one got behind my glasses lens, one got in my hair, then another crawled down the back of my shirt! :-0 To top it off, mosquitoes were biting my legs, so I was just about to call it quits around mid-night when I spied this gorgeous moth on my window frame! It was too high to use my tripod, so I had to stand on my step stool with one foot, the other foot was on the recycle bin, my knee was on the grill and I propped the camera on my arm to try to keep it steady to get the photo. In the meantime, I was getting assaulted by all kinds of insects flying flying around the porch light above my head. 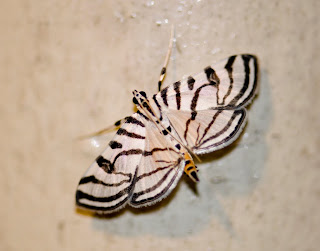 After several lousy shots, I decided to risk catching the moth in a jar and transferred it to the sheet. It stayed there for a short time and then flew to the post on the carport --- FINALLY, I was able to get a good photo!!!
Thanks to the folks in the TN Moth Group for letting me know it is a Zebra Conchylodes Moth. I just thought fellow moth-ers would appreciate this story, I'm sure most of them have had similar experiences at one time or another! :) I guess you have to have a few bad nights to make you appreciate the good ones. I'm just so thankful this beautiful creature decided to stop by for a visit to save my night! :) I'm now up to 80 moths for the Anderson Co. record (yes, people really do keep tabs on this!), we're up to about 4th in the state in the number of species recorded rankings.
My "known moths" gallery can be viewed at:
http://picasaweb.google.com/klight10/MothsAndersonCountyTN2010#
I have them organized by wing shape, I'm not good enough at the families yet to list them that way! Moths aren't just organized by families, they have "superfamilies" and even "tribes"! Now I can appreciate why people have a hard time finding wildflowers in books listed by families! Hopefully, in time, I will start to get the hang of it with the moths!

Posted by Kris Light at 8:29 AM No comments: