It won't be long now!

This morning around 8:30 I checked on the progress of the chrysalises (chrysalids? I'm not sure about the correct plural version!) in my critter cage. I was excited to see that the color of the wings is now visible and the chrysalis covering is beginning to separate from the butterfly. Unlike the caterpillar shedding its skin, there is no "advance warning" with the emergence of the butterfly. I've been lucky enough to see this process happen only 3 or 4 times in the past 23 years. Maybe I'll get lucky again today!
One chrysalis is still green, I would imagine it will be black tomorrow. It is amazing how fast it changes color once the process begins.

Later --- I KNEW if I went shopping the butterflies would emerge and, sure en

ough, they did! When I came home from the store around 1:30 PM there were 2 butterflies hanging under the container lid, a male and a female. I think the male was the first to emerge, because he was already holding onto the container lid. The female was still holding onto her empty chrysalis. It is easy to tell

the difference between a male and female monarch butterfly. The male (right) has a black dot in the middle of one of the veins on the lower wings, they are just visible in this photo. I put the male on a flower when he began to spread his wings. He could probably use a little nectar by now! These butterflies will fly north, possibly as far as Canada. After they mate and the female lays her eggs, she will die. Later this summer we will see the "grandchildren" butterflies as they fly back south. They will lay eggs on the milkweed in late August or September, the butterflies from those caterpillars will fly to Mexico and spend the winter in the trees in the mountains not far from Mexico City. It is my dream to one day go there and see the masses of butterflies!
Posted by Kris Light at 9:15 AM No comments:

It has been a week today since the Monarch caterpillar experience. Here is an update on the chrysalis situation. I took this photo yesterday afternoon. A monarch chrysalis is like a piece of polished jade with flecks of gold and a thin strip of black onyx, quite a sight to behold in the sunlight. I've read that the gold dots may help camouflage the chrysalis, looking like drops of dew. The developing wing shows through on the right side. By Sunday or Monday of next week, the chrysalis will begin to darken as the wings and scales of the butterfly begin to develop. I hope to catch one of the butterflies as they emerge, I have 3, so maybe I'll get lucky!
Today I took some of my small nature notecards up to Frozen Head State Park to sell in the gift shop. I decided to take advantage of the time there to do some

hiking and photography (mostly photography!). I spotted a Goatsbeard plant in bloom along the roadside. I pulled over and got a few shots. When I got back in the car I noticed something land on my windshield. It was a small Daggermoth caterpillar. I grabbed my camera and tried to get some photos befor 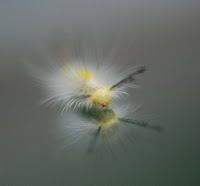 e it crawled away. Insects can be challenging to photograph, they are often not very cooperative! I got a kick out of one photo I managed to get. There is a lot of humor in nature if you look closely enough! :)
An interesting note about Daggermoths is the females of some species do not have wings or a mouth. I once watched one after she emerged from her coccoon. She pumped her abdomen (I later realized she was releasing her pheremone or "moth perfume" after I released her) as she clung onto a stick in the jar. I took her outside and put her on a tree trunk. I threw the stick she had been resting on to the ground. A few minutes later I saw a male moth circling the stick because it was covered with her pheremone! I placed the stick near the female and soon the male found her. They mated, which had to be tricky because she was wedged between a piece of bark, then he took off. Within minutes the female began to lay eggs on the tree trunk. The more she laid, the thinner she became. She rubbed the body scales from her abdomen over the eggs to protect them. Finally, when she was finished laying them after 45 minutes, she rubbed her scales over them one more time then fell from the tree and died! I thought, "This poor moth is a chauvinist's dream woman and a feminist's nightmare! She has no wings to fly, no mouth to drink with, and her whole purpose in life is to make a male happy, carry on his genes and then she falls over dead in less than an hour!" Well, such is life!

Oops, I guess I got a bit carried away with that story! Ok, back to today! When I pulled into the parking lot I saw several male Tiger Swallowtail and a couple of Red-spotted Purple butterflies "puddling". They were drinking something on the ground, perhaps where someone had poured out a softdrink. It is common to see butterflies exhibiting t 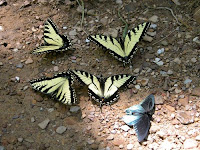 his behavior where animals have urinated or defecated. I've even seen them puddling on dead animals. Yes, I know that sounds gross, but they are taking in highly needed salts and minerals. The males will pass these on to females when they mate.

The Mountain Laurel was in full bloom in the garden at the Panther Branch trailhead. That is one of my favorite wildflowers because the blooms are so different and interesting. When the flowers bloom the stamens are tucked into little indentions. When a bee lands on the flower the stamens pop out of the "pockets" and shower her with pollen. These flowers have not yet been visited by a bee. All parts of Mountain Laurel are highly poisonous, including the pollen and nectar. The small pink ring in the middle of the flowers is the nectar guide, it shows the bees where to find the nectar.
I saw some interesting Coral Slime Mold on a dead branch on the ground and I wanted to get a photo (yes, slime mold CAN be interesting!). After I had finishe

d getting my shots I suddenly realized I had been kneeling in Poison Ivy! So, I had to cut my hike short and get back to the visitor center to wash my leg! I guess it was meant to be though, before I reached the car I heard the rumble of thunder. Frozen Head is tucked back in a valley between mountains, the weather there gets funneled down into the valley and can get bad very fast. After washing up, I ate lunch at the visitor center. During that time the storm arrived, I was stuck there for about 1/2-hour. I got to talk to some teachers from Morgan Co. who were there for the week-long science camp, so the time went by quickly!
Posted by Kris Light at 8:52 PM No comments: