This afternoon I was working out in my garden cutting back dead Monkey Grass leaves, pulling up Money Plant seedlings and removing Vinca vines that have gone wild, when I heard a commotion of frantic bird calls in a nearby tree. I looked up and saw two small birds fighting in mid-air. They were backlit by the sun, so at first I had a hard time seeing what they were. Finally I noticed one was a Tufted Titmouse and the other a Downy Woodpecker. The Titmouse was attacking the woodpecker and it lost some feathers in the scuffle! The poor little woodpecker finally landed on a tree limb and went into a hole on a hollow end. Suddenly I saw a Black-capped Chickadee, a Nuthatch and a warbler-type bird getting in on the action by swooping next to the end of the branch where the woodpecker was hiding. I was amazed to see 4 different kinds of birds working together to harass the woodpecker. Perhaps they all wanted the hollow branch as a nesting area. I just regret I didn't have my camera handy to record the action! 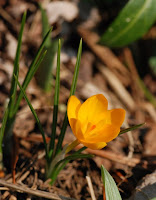 My little yellow snow crocus and Lenten Roses are blooming now. It always seems strange to see them open in January! I plant some in my yard each fall, so they are popping up all over now!
Posted by Kris Light at 9:01 PM No comments: