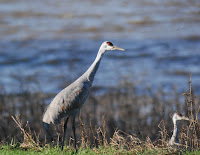 On Dec. 21, 2008 we took our son Curtis and his girlfriend Jeanie, who were visiting from California, to the Hiwassee Wildlife Refuge (near Birchwood, TN) to see the Sandhill Cranes (Grus canadensis). For map to refuge, click: http://maps.google.com
Today was the first day of winter and it REALLY felt like it! The wind chill made observing and photographing the birds quite a challenge! I was veryanxious to try out my spotting scope with my camera on the cranes so I "toughed it out". I still didn't have my bracket to attach it to my tripod, but a nice man who was also photographing the birds let me borrow his.
The Tennessee Wildlife Resources Management Agency (TWRA) plants grains at the refuge to attract and keep the birds there over the winter each year. It is an amazing sight to see and hear thousands of these large gray birds in the fields and in the air. We had hoped to see Whooping Cranes and Snow Geese like we did last year. Those birds were not there, but we did see a few ducks and a red-tail hawk that made the cranes a bit nervous.

It is a challenge to photograph the cranes when they fly directly overhead! 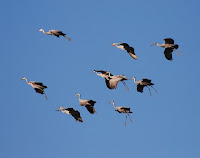 I always get such a kick out of watching the cranes come in for a landing, they look so awkward as they seem to fall from the sky!
There didn't seem to be as many cranes this year and they weren't in some of the other areas away from the refuge. I guess the farmers outside the refuge limits got tired of gawking birders parking near their fields! That's too bad, they provided some of the best views! The cranes should be at Hiwassee until the end of January or until TWRA mows the grain fields (their not-so-subtle way of telling the cranes it's time to leave!).
For more information on the Sandhill Cranes check out the Cornell birds website: http://www.birds.cornell.edu/AllAboutBirds/BirdGuide/Sandhill_Crane.html
Posted by Kris Light at 8:51 PM No comments: