Our friends Carol and Richard invited us to go to a Hummingbird program at Ijams (pronounced: Eye-ams) Nature Cent

er in Knoxville, TN tonight. It had been well advertised and was so well attended several banding sessions had to be done and the speakers had to do two talks. What a great "problem" to have!
It was fascinating to watch the trapping and banding process. A trained bander would stand several feet away 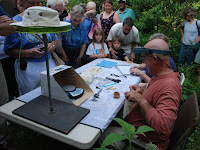 from caged hummingbird feeders holding monofilament lines that were attached to trapdoors on the cages. When a hummingbird flew into the cage to eat, the bander would release the trapdoor and trap the bird. He the

n gently captured the bird and placed it into a small mesh bag with a drawstring at the top. This was given to the master bander and he then weighed, measured and banded the tiny birds. The birds were held carefully in a "footie" stocking so they could be handled without injuring them. Measurements were made of the length of the wings and tailfeathers, the length of the beak (right), the bird's gender and approximate age (juvenile or adult) was recorded, and even the amount of fat the bird had stored was recorded. In order to tell how much fat the bird had on its abdomen the bander took a straw and blew the feathers aside to reveal the bare skin. That got quite a few chuckles from the crowd as many people patted their own bellies! :) Fat on these birds can be crucial for survival due to their high metabolism and the long distances they must fly d

uring migratory flights.
The tiny bands (left) are made by the banders. The numbers are recorded and sent to a national bird information database

. Hummingbirds have such short legs they are unable to walk, they can only perch. There is not a lot of leg area to place a band on! Here is a photo of a newly placed band (right).
Finally, the tiny birds were released unharmed, but with a new piece of je 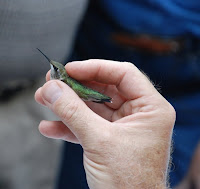 welry!
Many of the participants, myself included, were surprised to hear the speakers recommending that hummingbird feeders be kept up and stocked all winter. They said the Ruby-throats that we have all summer will migrate, but several other species will come to the feeders. That was news to me, I had always heard that if the feeders were kept up after October the birds would not migrate and they would freeze to death. We were assured that was an old wives tale.
Capturing and banding hummingbirds requires training and banders must be licensed to be allowed to handle them. These tiny birds can be injured if mishandled, so please "don't try this at home"!
On another note, a couple of days ago when I took the food scraps out to the compost pit I noticed the magnolia cones under

our trees had weird white growths coming out of them. When I picked up a cone, the growths gave off a cloud of white spores. Upon further inspection I realized the old cones were being decomposed by a type of fungus. Some fungi are highly specialized and will only grow on specific types of plants or wood. These fungi are called Carbon Antlers. Sometimes truth is stranger than fiction!
Posted by Kris Light at 10:44 PM No comments: