I noticed movement in the waterfall of the Secret Garden's pond at my school this morning. It was a Common Crow trying to get a drink from the gushing water. Most of the area's still water was still frozen from the frigid temperatures of the past week, so it was having a hard time finding water to drink. Earlier I had seen a Mockingbird drinking there. It was smaller and didn't have as much trouble finding a good foothold on the rocks between the ice like the crow did.

Later, just as I was getting ready to leave school I spotted this gorgeous male Cardinal sunning himself in the hawthorn tree in the garden. These trees were planted in 1996, when the garden was developed, as a food source for the birds. However, they must not like the berries very much, there are still lots of them remaining on the tree in mid-January. I really don't like those trees, they stink when they bloom, they have wicked 2"-long thorns and the berries sprout all over the garden. They would have not been my first choice of trees to plant!

The big excitement of the day though, was when I spotted this brilliant male Eastern Bluebird checking out the birdhouse in the garden! The non-native House Sparrows had claimed this house the past 3 or 4 years. When I cleaned the house of old nests last fall I hoped the rightful "owners" would reclaim it, fortunately, it looks like we are going to be enjoying bluebirds again this spring and summer! :)
Posted by Kris Light at 7:37 PM No comments:

I had hoped to see at least one of our favorite waterfalls frozen and with snow. I finally got my wish when we went to Frozen Head State Park on Jan. 19. Our friends Terri and Rod went with us. Snow flurries started falling as we left Oak Ridge. As we gained altitude driving north up the Cumberland Plateau we began to see more snow. The road into the park was covered with snow, so we knew we were in for a treat! We hiked through the snow up to DeBord Falls and then up to Emory Gap Falls (below). The icicles were huge at the second falls. I tried not to stay under them too long in case one of them fell off.


When we got home I put the macro lens on my camera in hopes of capturing some snowflakes to photograph. I put a pair of ski bibs on the edge of the grill and caught snowflakes. The grill gave me something to prop the camera on since my tripod was indisposed at the time. I love looking at snowflakes. What a treat from nature! :) 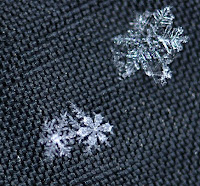 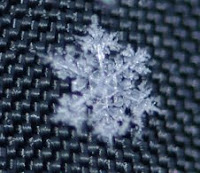 Posted by Kris Light at 2:04 PM No comments:

The recent frigid temperatures have turned the local waterfalls into a winter wonderland. Today Kenny and I drove down to Fall Creek Falls Resort State Park (~100 miles southwest of Oak Ridge) to see the falls with ice. Wow, what a spectacular sight! The large waterfall in this photo is the park's namesake, the smaller one on the right is Coon Creek Falls.


We walked to the bottom to get a better view of the ice below the falls. The spray was incredibly strong, so I had to wait for the wind to die down some and go to a higher point on the trail. It was pretty slippery trying to walk on the ice from the frozen spray.

Another waterfall in the park, Rockhouse Falls, was beautiful to see as it plunged over the cliff near the Nature Center. Sights such as these help make the frigid temperatures of winter much more bearable.