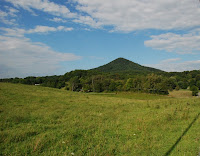 Kenny and I had thought about going to the Smokies to hike today, but we didn't get an early enough start. So, we went to Plan B. We had not gone to House Mountain, one of our newe

r state natural areas in east Knox County in a long time, so that turned into our next destination of choice. House Mountain is located off Hwy. 11 W. It is a quite popular area, we saw several people on the trail. The hike is steep and not especially easy, but it is worth it because the views from the top are spectacular. On a clear day you can see the Cumberland Mountains to the north, the Smokies to the south, andKnoxville to the west. The farmland around Corryton is so pretty, as seen in the photo on the right. It is possible to watch hawks, crows and vultures from the top, sometimes they fly below you! Here is a map of the area.

We enjoyed seeing lots of insects and

a few wildflowers along the trail. One of the

more unusual insects was the Bristletail. You really have to be observant to see these strange insects as they scurry over the boulders. They are extremely well camouflaged, if they don't move you probably won't notice them. I was photographing the weird lichens (like this Toadskin Lichen) on a boulder when I spotted this one.

We also enjoyed watching a Tawny Emperor butterfly as it land

ed on one of the boulders at the top. It was trying to get salts or minerals from the rock. Butterflies will often land on hikers to drink their sweat. I know that sounds yucchy, but they need the salts and minerals that they can't get from flower nectar. It is not unusual to see butterflies on animal scat (poop) for the same reason! If you wondered, yes, I was laying down on the rock to get these photos!

Some of the wildflowers we saw included Flowering Spurge 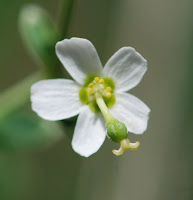 . It is related to Christmas Poinsettias. The little white "flowers" are interesting. Most flowers have the seed-producing ovary below the petals, Flowering Spurge has it above and it sticks out away from the flower on a stalk. I have joked that this should have been the "Official Flower of the Women's Movement" because it has a superior ovary and it is surrounded by male flowers (the 6 little yellow kobs) to take care of the job of pollinating the flower! We also saw lots of Southern Harebell, White Snakeroot (the plant that was responsible for the death of Abraham Lincoln's mother see the explanation on my website: http://www.easttennesseewildflowers.com/gallery/view_photo.php?set_albumName=Fall-Woodlands-White&id=Snakeroot_white 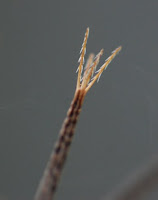 ll-Woodlands-White&id=Snakeroot_white), Dittany, White Leafcup, Bear Paw, Joe Pye Weed, Ironweed, Goldenrod, Grass-leaf Golden Aster, Tick Trefoils, Rosinweed, Lobelias and Spanish Needles. The seeds of Spanish Needles are quite adept at hitchhiking on socks and pants. I got a close-up shot of one to show the tiny barbs that hang onto peoples' clothes and animals' fur.

Even though we didn't get to do the hike we had planned, we had a great time today! The weather was cool and breezy, more like late September than late August.
We enjoyed talking to the people we met on the trail. We spent over an hour talking with 2 couples at the top (Pam, Steve, Heather and Chauncy). They were as interested in the bugs as Kenny and I were, so we had fun watching the butterfly and other insects.

Kris & Kenny.. I want to Thank You for all the information that you took to time to share with us, we really enjoyed it.. I personally have a new way of waking the trails, on the rest of the hike from House Mt. I found myself looking for flowers, & bug., ext. We all spent the rest of the afternoon looking at your website, its AMAZING!! I have posted your picture with the website on my Facebook so all my friends and Grandchildren can visit and learn.
That was very sweet of you to mention are names as well ,, we feel famous!! Take care and I will sign off for all. Steve, Pam Chauncy & Heather.