I'm running a few days behind on this entry, there has just been too much going on this week! Sometimes I wish April had 60 days instead of 30! We went to Big South Fork National River and Recreation Area on Apr. 11 planning to hike up to the Angel Falls Overlook. It was quite a surprise when we went to cross the footbridge and saw it was blocked off. A large section of the middle was gone and the iron railroad rail support beam was badly bent. I guess there must have been a big tree that came down the river during the spring floods.
I had long wanted to hike on the other side (the shorter, flatter, easier side!), so we finall

y had a good excuse to do it. Since that side of the gorge faces north, we saw lots of wildflowers. I was thrilled when one of the first flowers I spotted was a large patch of Virginia Bluebells (right)!These pretty flowers start out as pink buds, then tu 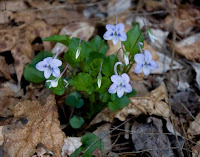 rn a sky blue. I have not seen these in the wild very often, so this was quite a treat! :) There were loads of violets of many colors --- pale lavender Long-spur (left), dark purple Blue, yellow Halberd-leaf, and dainty little Sweet Whites. There were 3 kinds of trillium --- Lemon, large Toadshade and Southern Red. One very easy-to-overlook little wildflower that bloomed along the trail was Dwarf Ginseng. The 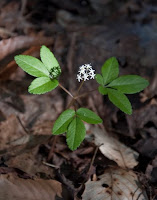 flowers look like a cluster of tiny white stars. I've seen this flower at Frozen Head State Park in mid-April in the past.

rs in the Big South Fork of the Cumberland River. In high water times it can be quite a challenge to navigate a canoe or kayak. We saw a canoe that had become caught on a rock in the fast-moving water. The outfitter company will have to wait until the water level drops to retrieve it. That would sure mess up a nice river trip!
As we were leaving the park we passed a large field full of Winter Cress, a highly invasive, but pretty yellow

member of the Mustard family. Fortunately, there was nobody coming behind us, so Kenny stopped on the road long enough for me to snap a few photos.
Posted by Kris Light at 8:32 PM