Amazing Ants and a bad case of MOADD!

I don't know if there is such a thing as "Maturity Onset Attention Deficit Disorder" or MOADD, but I think I have it! I find it doesn't take much to get me distracted and WAY off task these days! This morning after I poured my cereal into the bowl and cut up the banana

to put on it I noticed some items I needed to take to the recycle bin since today was pickup day. As I was going up to the bin by the curb, I noticed ants were clearing a large amount of soil between the expansion joint in the driveway to use as a trail. So, I went to get my camera to get some photos of them at work. When I got back out there a few seconds later, I noticed a robin standing on the driveway next to the ant trail. I realized I was witnessing a bird activity called anting. He would peck at the ants and spread his wings above them to get them riled up. Some ants spray formic acid from their abdomen as a defense mechanism, birds have learned to take advantage of this practice by using the ants to help rid them of mites and bird lice on their feathers. How cool is that!? Unfortunately, I had my macro lens on the camera and I couldn't get much closer, so this video isn't as good as I would have liked. If I had run inside again to change to the telephoto lens, I would have missed it!


The recycle guys got a laugh when they saw me squatting in the driveway peering through my camera on my little tripod! But I was so fascinated watching the ants clearing the path I didn't want to stop. T 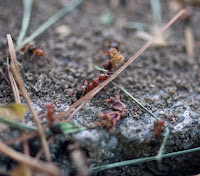 hey were quite busy clearing out pine needles (left), grass and even rocks that were in their way. 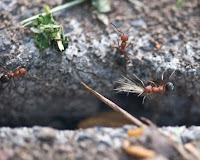 I got a chuckle when I saw one little gal carting away a sycamore tree seed, she looked like she had a bushy beard (right)! :)

I was most amazed though when I watched a one poor ant struggling to drag a stone out of the path. The incredible strength of ants is mind-boggling! Can you imagine trying to pull a boulder bigger than yourself out of the road just using your teeth!?

Fortunately, I had not poured milk into my cereal bowl, it would have been REALLY soggy when I finally got back to it an hour later! I've really got to try to keep my MOADD under control! On second thought, I guess I'll just live with it and accept it, I'd miss a lot of interesting things otherwise! ;)
Posted by Kris Light at 11:42 AM