More Jewels from the Sky and a frozen waterfall

The frigid temperatures are going to last just a few more days, then the mercury (or red alcohol) will be rising again at the end of the week. So, I'm trying to take advantage of this cold weather as much as possible. Just as I was getting ready to start cooking my oatmeal this morning I glanced out the window and saw snow flurries. I threw on some warm clothes and gloves, grabbed the camera and tripod and went outside to photograph some more snowflakes. This is becoming addictive! :) 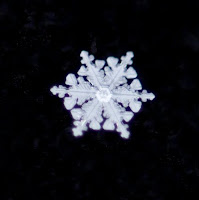 temperature was just in the low teens instead of the single digits this morning, the snowflakes were a bit differen 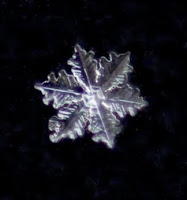 t. The ones I photographed earlier in the week were dendrite snow crystals, which occur at 3 - 10 degrees. This morning we had some spectacular sector plate crystals, they are more solid and have some really amazing details. These snowflakes form when the cloud temperatures are 10 - 14 degrees. I finally had to give up after an hour of catching flakes and photographing them when the flakes
became too small (less than the size of a pinhead!) and my toes got too cold. The detail in the center of the bottom snowflake is incredible! Click on the photo to enlarge it. 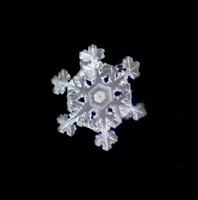 t Piney Falls. I was thrilled to see 4 large sandstone boulders blocking trails that had been cut through the woods by the local people wanting to go 4-wheeling on the road. The last time we went hiking there we were appalled at the damage that had been done to the road by uncaring people. I sent photos to the department that is in charge of the State Natural Areas to show the damage.

We drove down to the area because we wanted to see the waterfall frozen. We'd seen it during every season and in all kinds of weather conditions, but never fr

ozen. We enjoyed seeing the large icicles along the trail to the bottom of the falls. I'd hate to be around when those things fall as the temperatures begin to warm next week!

We were amazed when we saw the waterfall! It had a huge

mound of ice that looked like a volcano below the falling stream of water. The cliffsides had beautiful, long icicles hanging from them. What a spectacular sight that was. This can happen only when the temperatures have been well below freezing for an extended amount of time. It has been extremely cold for over a week here now.

I also enjoyed seeing the interesting pattern made by the water as it flowed down the trail and froze. It was interesting until I tried to walk on it an

d I slipped and fell. I have a nice bruise on my gluteus maximus now!
Posted by Kris Light at 10:32 PM

Wow!! flowers! It is hard to remember winter in Tennessee. We still have snow--Not like PA and NJ, but a little at a time. I don't know about those purple snowflakes-- a little OFF to me. Love looking at the Blog!