On Sunday (I'm a little behind getting this posted!) I went to the Cherokee National Forest and Cherohala Skyway with my friend 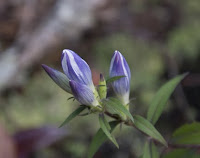 s, Charlie and Roseanne. Our first stop was Conasauga Falls in the National Forest. As we were driving along the gravel road back to the falls, I spotted an unusual wildflower. Fortunately, Charlie likes wildflowers too, so he was more than willing to stop. It was a Striped Gentian (Gentiana villosa).

The waterfall was a moderate 1-mile from the parking area. On t

he way down we enjoyed seeing the beautiful colo

rs of the fall leaves. The Sassafras, Sourwood, and Red Maples were especially bright. We saw several mushrooms and different lichens and fungi along the way too. I was glad this mushroom survived their 2 dogs, Tootsie and Peanut. Tootsie gets excited about hiking and tears down the trail!

It was a bit tricky getting down to the waterfall because the bank was very steep. I'm still a bit leery to have my camera around water after last weekend's disaster! I was very careful and stayed away from any slick rocks. This was my first trip to Conasauga Falls (left), thanks to all the recent rains

the water level was pretty high. It made for some nice photography.

Our next trip was to Bald River Falls. It was the highest level I had ever seen the river. The kayakers were having a great day! We stopped along the road several times to photograph the river and the kayakers.

Bald River Falls was roaring! It was the best I'd ever seen. The last time Kenny and I came down to see it, p

eople were climbing on the rocks in the middle of the falls, that wouldn't have been possible this time! We didn't have a lot of time at the falls because we hadn't had lunch, our stomachs were growling and we still wanted to get to the Cherohala Skyw

ay before sunset. As we drove up the gravel road to the top we stopped a few times to get photographs of the stream. I especially liked this shot. I don't know if this pretty little waterfall has a name or not, but I called it Split Falls.

p. There had been a snowfall and some freezing rain overnight that turned the high elevations into a winter

wonderland. Quite a surprise in October! The best view was about 1000 feet higher into North Carolina, it was completely white!


Our last stop was at one of the overlooks to watch the sunset. Brrr, it was cold up there!