NASA Rocketry Workshop at the American Museum of Science and Energy

My co-worker, Renee and I, along with 14 other teachers, attended a day-long rocketry workshop at the American Museum of Science and Energy today. It was put on by fac

ilitators from the NASA Marshall Space Flight Center in Huntsville, AL. We made water-powered rockets from 2-liter soda bottles, a straw and a balloon on a string, film canisters with effervescent tablets, and then finally, small model rockets. Some teachers got quite creative in their decorations; these 2 teachers want NASA to paint polka-dots on the next rockets! Hmm, I wonder what the Russians would think 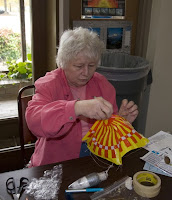 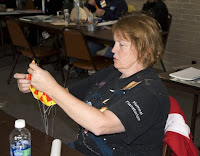 rachutes. We loaded an egg as "payload" in the nosecone of our rockets. Some people used bubble wrap, plastic, parts of the egg cartons, paper towels, etc. I decided to try sodium polyacrylate gel in mine. You can see one of the nose cones in the photo on the left.

Later we got to go outside and try out our r

ockets. It was quite breezy, so

we had a little difficulty launching them at times. Renee was one of the first people to launch her rocket, a stiff breeze blew up and her rocket landed in a tree! Most people had successful launches, no one had a launch pad failure. When the rocket motors burned to a certain point they shot out a second time and released the parachutes (see photo below). 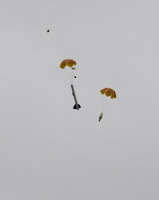 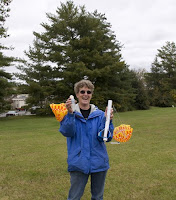 turally, by using the gel, I had the heaviest payload, so my poor rocket barely got high enough to release the parachutes. But the gel did the trick and my egg did not break!

It was a fun day and we learned a lot. Teachers enjoy getting a chance to be "students" too! I hope we can do the rocket activities at science camp next summer!
Posted by Kris Light at 5:20 PM