Venus, elk and other critters

Happy Birthday to my favorite "blog follower", my son Curtis! :) My day started out early, before sunrise on the weekend is early for me! I was rewarded by a beauti 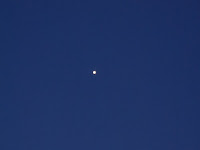 ful sight of Venus in the east as I went out to get the newspaper. I ran in, put the telephoto lens on my camera and stuck it on the tripod to try and get a photo. It came out pretty good. I'd like to try photographing it with the spotting scope. I'd have to have it set up the night before, it is hard to set that up when you are bleary-eyed early in the morning!

I got up early on a Sunday morning was to go see the elk up in Campbell County. Our friend and photography buddy, Charlie, had invited us to go with him. Kenny wasn't feeling well this morning, so Charlie a

nd I headed up on our own. The drive up I-75 was so pretty. I was happy to get some photos of The Devil's Racetrack (left), a large sandstone outcropping near Cove Lake State Park (right). The clouds were hanging over the tops of the Cumberland Mountains, what a beau

tiful sight! We stopped briefly at the park to get a few shots too.

We enjoyed seeing a Moskovy duck family paddling around in the lake. I hope the ducklings can mature enough in the next few weeks to survive the cold weather that is due to arrive soon!

Although we would have enjoyed seeing more of Cove Lake, we were anxious to get up to Royal Blue Wildlife Management Area to see the elk. We turned onto Hwy. 25W out of Lafollette until we came to the gravel road that goes up to the elk viewing area. The 7-mile road is pretty rough in some spots, yesterday's torrential rains sure didn't help either! The area has been heavily logged and mined (for coal), so the roadside views were much different than those in the Smokies. Finally, we reached the parking area, then we had to walk another 1/4-mile to the observation tower (which I forgot to

take a picture of!). :(
It was nice to see that something good could come out of the devastation from mountain-top removal mining. The TN Wildlife 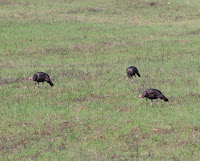 Resources Agency (TWRA) has seeded the area with clover, alfalfa, native cool and warm-season grasses, and soybeans. Of course, there is some forest around the edges where the elk hang out most of the day. The original elk were brought here from Alberta, Canada in 2000. The first animals we saw when we arrived at the observation tower were 2 flocks of wild turkeys, one of hens, the other was all toms. These 3 toms came out later and got within about 100 yards from the observation tower. The hens were not quite so bold.

We were very excited when we finally heard the loud, tinny bugling sound of a bull elk off in the woods! It was a sound I've heard only on nature documentaries on TV, I had always wanted to hear it in real-life! We watched for nearly an 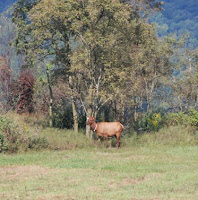 hour and finally Charlie whispered excitely, "Kris, there's an elk over in the trees"! Sure enough, there was a beautiful cow elk standing under a pine tree. She was a large individual, even from a distance of well over 100 yards, we could tell she had a radio collar and ear tags. (If you click on the photo, you may be able to see the tags) We were much too far away to be able to make out the number on the tags. Soon a second, untagged cow appeared. Time and again, we heard the bulls bugling on the edge of the field and could tell they were getting closer, but they just wouldn't make themselves visible. Naturally, just as we were packing up to leav 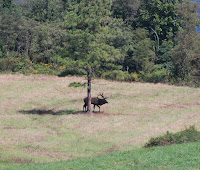 e, I saw a huge bull walk over to a lone pine tree a couple of hundred yards away. I quickly put my 300mm telephoto lens back on my camera and hoped the bull would stay in place while I mounted the camera on my tripod. He rubbed his antlers on the tree and then let out a loud bugel sound! That made our entire trip worth it! He was quite a handsome guy with a very impressive rack! I'm sure he really gets a lot of attention from the ladies! ;)

We hated to have to leave, but we were afraid our growling stomachs would scare off the elk! As we walked the 1/4-mile back to 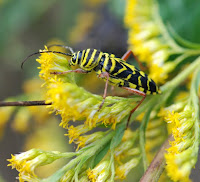 the car we enjoyed looking at the butterflies, bees, beetles and caterpillars on the wildflowers. One of the prettiest beetles was the striking yellow and black Locust Borer. They are often found on Goldenrod flowe 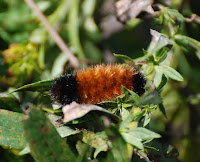 rs, as this one is. We also saw a Wooly Bear caterpillar. According to folk weather predictions, we are in for a harsh winter! The more brown the caterpillars have, the more cold weather the winter is supposed to have. This critter has a lot of brown! It has been a LONG time since we had a good snowfall here, we are due!
Posted by Kris Light at 5:18 PM