It has been a while since I got out my spotting scope, but I decided to take advantage of some clear skies last night and early this morning. Last night I took the tripod, camera and scope out to the back yard and got some photos of Jupiter and its moons. This was the best planet photo I have been able to get so far. I just wish the bands of color and the Great Red Spot were visible! I'm never satisfied! Ha!

ough above the trees to get a good shot. Finally, at 6:30 my efforts were rewarded and I was able to get some decent photos. Venus is now in the "Morning Star phase". The planet can be seen either just before sunrise or just after sunset at certain times of the year. I found an interesting website discussing the phases of Venus, however it must be translated from German.

Next I moved the tripod to the patio and tried to photograph the nebula in Orion. Unfortunately, it is just too faint to show up in a photo. After that I lowered the legs on the tripod, turned the scope STRAIGHT UP, got under the camera and took a couple of shots of the Pleiades, the tiny constellation also called the "Seven Sisters" (Subaru in Japanese!) There really are stars in this photo! Click on this picture to enlarge it.

I'm looking forward to more cool, clear nights this fall to try to get some more photos.

The Moon was in the waxing gibbous (just before full) phase. It made for s 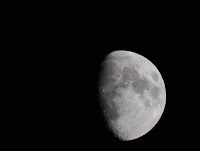 ome nice pictures too.
Posted by Kris Light at 8:55 PM