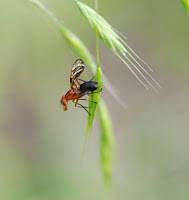 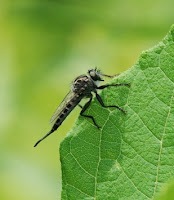 We've had an interesting week out at science camp. Yesterday we took a hike to the woods and later to a field. We saw some fascinating insects, including this Picture-winged Fly (left) and Robberfly (right). These large flies capture other insects and eat them.

Earlier, we had a class on sound. After the lecture the kids got to try out some of the noise makers (supposedly to learn about soundw

aves and vibrations), and they sure did make a lot of noise!

Just imagine the noise these 5 kids are making and then multiply that by 4! It got pretty loud! One instructor finally had to take a break from it! :)

We have seen some pretty cool critters too. This morning we caught a dragonfly that was acting very sluggish (otherwi 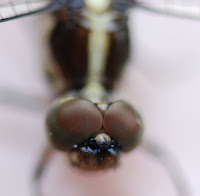 se we probably wouldn't have caught it!). I put it in a large petri dish so I could photograph it up close. I was happy to get a pretty good photo of its eyes. Dragonflies have up to 50,000 fascets in their compound eyes. Click on the photo to enlarge it and see the small fascets.

Both yesterday afternoon and today we had the added and unwelcome excitement of violent thunderstorms that blew through the area. Yesterday's storm hit just before the parents were to pick up the kids. We played a few games as we waited for the rain and lightning to let up. Today as I was teaching a geology class the weather radio alert alarm wailed letting us know another storm was on the way. Soon the western sky turned a nasty purple color and the wind began to blow. We quickly moved the materials and kids inside and continued teaching the class the best we could. The kids adapted well to testing their rock samples sitting on the floor and benches as the thunderstorm raged outside.

Tomorrow we will go to the Oak Ridge National Laboratory for a tour and then do the Stream Ecology class, I sure hope it doesn't rain again!
Posted by Kris Light at 7:19 PM