Kenny and I spent 10 days, from Mar. 24 - Apr. 2, in the Hill Country of Texas. When I bought the airline tickets in January I didn't know the area had been going through a record-breaking drought for over a year! But, once you've plunked down all that money, you've passed the point of no return! We flew into San Antonio and visited the Botanical Gardens shortly after arriving. Fortunately, they water the plants there, so we saw some wildflowers. I have long wanted to see the Texas Bluebonnets, so I was glad they had some there. The gardens had flowers from the different regions of the state, so we saw lots of flowers we wouldn't have seen otherwise. Despite the drought, I documented 150 different wildflowers during the trip!

e had to do the "tourist thing" while we were in San Antonio too. The Riverwalk and the Alamo were "must-do" activities. I was fascinated to watch Yellow-crowned Night Herons build a nest as we ate lunch at a cafe by the river! The Boat-tailed Grackles were quite comical and noisy, they were everywhere in the city! The Alamo was impressive, knowing the history of the battle that took place there, many of our fellow Tennesseans died there.

sday we went to Austin and visited friends in near-by Bastrop. We got a taste of wild Texas weather on Friday when we "went through hail" to get to the Lady Bird Johnson Wildflower Center in south Austin! Fortunately, by the time we got to the cen

ter the rain had let up and soon the sun began to shine. It is a wildflower enthusiast's dream come true to see so many different wildflowers --- and they come with labels! :)

Later that afternoon we drove over to McKinney Falls State Park (right), southeast of Austin. Due to the drought, the falls were not very spectacular, but we were able to walk across them. Austin and San Antonio are at the eastern edge of the Edwards Plateau, all of the rock in the area is limestone from an ancient seabed. The water has carved some fascinating "sculptures" over the eons.
Later that evening we drove

to the Austin city limits (pun intended!) to see the emergence of the Mexican Free-tailed bats at the Congress Avenue Bridge. The cold-front that had brought the hailstorm earlier in the day also brought in wind and chilly temperatures, so we didn't see the clouds of bats that we 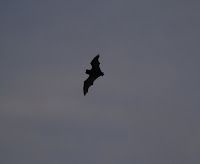 had expected. It was amazing to realize there were nearly 750,000 bats living in the slits in the concrete below the bridge! I was excited to get a picture of a bat in flight, not an easy thing to do! :)

On Saturday we finally got to head to the real Hill Country! We stayed in a little town called Boerne. It had a na

ture center where we enjoyed watching the Black-chinned Hummingbirds, White-winged and Inca dove

s and Lesser Goldfinches, all new birds to us. Cypress tree-lined Cibolo creek runs through town, where we saw Lesser Scaups (right), cormorants, Whistling Ducks, geese, Kingfishers and many other different birds. 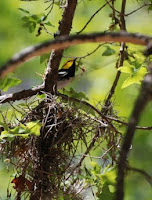 Next, we drove to Leakey and Concan, TX. We visited Lost Maples State Park near Leakey (pronounced "lakey") on our way to the resort in Concan. The park is named for the Big-leaf maple trees that are found nowhere else in that part of the state. It is also famous for the endangered Golden-cheeked Warbler (right) and Black-capped Vireo. We felt very fortunate to see the warbler as we hiked through the woods!

Garner State Park is just a couple of miles north of Concan. It is a birder's paradise! I'm not into birds as much as I am into wildflowers, but I had a great time photographing the many different species we saw there. I wish I could have taken my spotting scope to TX! It is hard to try to photograph them

with a 300mm lens! The warblers are very active little birds, they don't stay still long enough to focus on them. My favorite bird there was the Vermillion Flycatcher (left). The male is brilliant red with a black mask. I stalked those birds all over the park trying to get a good photo! We also saw a Hooded Oreole, various warblers, Golden-fronted Woodpeckers, hawks, and Scissor-tailed Flycatchers. I wished I could have taken my Sibley's Guide to Birds, but it is a big book and I already had my wildflower books to lug around!

We stayed in a cabin at the River Rim Resort in Concan. Since we were there during the off-season, we pretty much had the place to ourselves. We enjoyed going down to the Rio Frio (Cold River in Spanish) to listen to the frogs and watch the birds. The rivers on the Edwards Plateau are spring-fed and therefore are crystal clear. If it had been a bit warmer, it would have been nice to swim in! Nancy, the owner, has put out several bird feeders, it was fun to watch the hummingbir 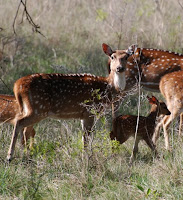 ds and even the woodpeckers come to the nectar feeder. We were surprised to see many kinds of exotic deer and other animals that have been brought into the area for hunting. The Axis Deer (right) escaped from a near-by ranch during the 2002 floods and have made themselves quite at home in the area. I photographed these from the car at Garner SP.

esort has hook-ups for campers, small cabins, larger cabins that overlook the river (see the view at left!) and a 4-bedroom lodge that will be completed by Memorial Day.

I will soon have the trip map on Google Maps and the photos on my website on the
Texas Gallery.