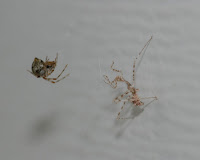 I watched a slow-motion drama take place on the window facing behind my house this afternoon. A bug nymph, I assume it was an assassin bug of some sort, was stalking a small spider. The bug would face the spider and use its antennae to touch the spider, probably in search of a vulnerable spot to attack. I took a lot of photos and even a movie to document what I saw. I finally had to take a break to eat supper.


Assassin Bug stalking spider
When I returned about an hour later the bug had caught the spider and was eating it!