Cool caterpillar, Sexy Spiders, and a "Wolf in Sheep's Clothing" among the Aphids

This was an interesting day as far as strange critters is concerned. This morning when I went to get the newspaper out of the driveway, I noticed a small white fuzzy creature on a milkweed leaf. The leaf was also covered with small yellow aphids. I quickly ran in and grabbed my camera with the macro lens and the tripod. It was amazing to watch the lacewing larva magnified through the lens. It pulled a tuft of white fuzz off the back of the leaf with its pincer-like mouth, arched its head backward and put the fuzz on its back! What a great form of camouflage to look and probably smell like the leaf! Now that it was well hidden, it went hunting for a nice juicy aphid to have for breakfast. Check out the choppers on that larva! The white drop is sap from the milkweed leaf, I had to bend it to get the sunlight on the larva. 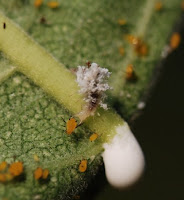 Later in the afternoon, Kenny and I went hiking at Haw Ridge. Just minutes after we got on the trail, I noticed some long white fuzz under a leaf. I turned the leaf over and found an amazing caterpillar, which I later learned was a Flannel Moth Caterpillar (Megalopyge crispa). It is related to stinging caterpillars, so I would not be surprised if it has a nasty surprise under all those long hairs.

Flannel Moth Caterpillar
Toward the end of the hike I was looking for spiders. Along the side of the trail I noticed a spider with way too many legs! Upon closer inspection, I saw that it was not one spider but two! I quickly put my camera on the tripod and zoomed in on the romantic couple! I was amazed at what I saw!
Male spiders have enlarged reproductive organs called pedipalps, they look like boxing gloves near the head. They put a drop of sperm into the pedipalps which are inserted into the female's epigynum (genital pore). The female spider was facing upward with her head near the back of the male's head. I was surprised to see that he used the enlarged pedipalps like boxing gloves as he rapidly beat them against the underside of her abdomen. She had a small black projection (the epigynum ) on her abdomen that the male would hit with the palps, possibly to get her into the "romantic mood". He would quickly open one of the palps to reveal the coiled yellow part which he used for mating. I have to be careful how I word this, I have to keep it "family friendly"!
Here is a photo of the spiders. It took about 40 shots to finally get this photo. It was a breezy day which is nice for hiking, but the wind can pose a real a challenge for macro photography!