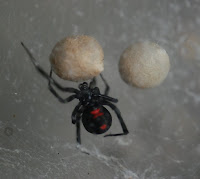 OK, first of all, I guess an explanation is in order! In mid-April my friend, Diana, gave me a Black Widow spider she found under her house. Being a science teacher has its advantages, it gives me an excuse for doing things that other people probably think of as being really weird! :) Other than just getting photos of her for my website, I took her to school to share with my students when we studied animals. In early June I took her to the AMSE (American Museum of Science and Energy) science camp to share with the campers. My husband, Ken, is especially fascinated by spiders. He captures flies in a large plastic zip-top bag to feed her. We named her "Arachne". It sounds strange, but we've become attached to her (we just don't want HER to become physically attached to US!), its been fun to watch her feed.

In early July we visited our son and his girlfriend in California for a week. We put several flies in Arachne's plastic container (a corsage box with a small flap cut into the lid for feeding) before we left. When we returned home on July 8 Ken checked on her and said, "You won't believe what Arachne did!" It didn't take too much imagination to guess what a female spider might do! We had noticed before we left that her abdomen was getting very large, so we weren't surprised to see that she had laid eggs. As of this morning, the egg case had not hatched. I have read it takes about 2 weeks for the babies (up to 250 of them!) to hatch and emerge from the case. Over the past week we noticed her abdomen getting very large again, sure enough, this morning there was a second egg case! I'm not sure what I'm going to do when her little bundles of joy hatch! I'll probably take them out into the woods far from any homes. I'll keep you posted!

It's good to see you! As a student, you are likely to face numerous challenges in the course of your college education. However, none of them will match up to the stress that accompanies endless assignments with strict deadlines and complicated instructions. In such situations, getting help from a fast custom online paper writing service will be critical. Don’t let those assignments stress you if you don’t know how to complete them yourself.