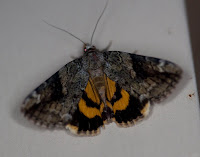 Google came up with some new backgrounds. I liked this one, it fits my theme better! I hope my readers like it too!

I had an interesting "bug" night on the carport last night. I turned on the black light around 9 p.m. and waited for the moths and other insects to arrive. It started out a bit slow, I don't think they like the damp weather any more than we do. I found a few new, pretty moths. This one is a Little Nymph Underwing. They look very different when they have their wings closed. I took this photo standing on a stepstool because the moth was on the ceiling of the carport!

The mite-infested Patent Leather Beetle was back too. I learned something amazing about the mites, they are NOT parasites as I had thought! They are just hitching a ride on the beetle to be carried to carrion or dung, they eat the eggs and maggots of blowflies! The beetle probably isn't too thrilled about having these mites all over his head, but they don't hurt him. I wonder if he charges a baggage fee since they use him as air transport? :)

The strange-critter-of-the-evening award had to go to the Mantisfly! I had seen thes 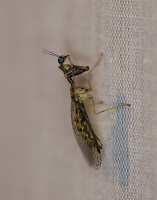 e insects in books, but never in real-life. It took a while, but I finally coaxed it onto the sheet, it had been on the ceiling near the porch light. What an unusual insect! It really did look like a small Praying Mantis with its odd legs!

To round out the night, I found a pretty Green Lacewing on the wall. These are very benefic 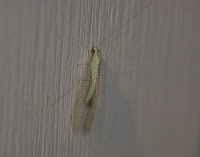 ial insects, they eat many other insects during their lifetime.
Posted by Kris Light at 9:38 AM

Love your new background! Looks like you're getting a nice variety of insects with your new hobby.