We had an interesting Memorial Day! We were to meet our friends, Terri and Rod, in Knoxville at 10 AM. As we were leaving Oak Ridge, I noticed something moving in the middle school yard. It was a large Snapping Turtle! We turned around a parked on the driveway so we could go and get a better look. Of course, I couldn't see something like that and not get a few photos! Soon, another car parked and a lady also came over to look at it. This turtle became quite a celebrity! As we were driving to Terri and Rod's house I spotted 2 large wild turkeys in a field off Schaad Rd. It was becoming quite a day for wildlife!

Since it had been raining, we decided not to go too far out of town. We decided to 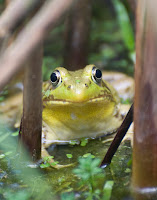 go to Ijams Nature Center and hike the trails. I love the pond near the Visitor Center, it has so many frogs, dragonflies, water spiders, etc. I got such a kick out of seeing this green frog, it had such a comical expression! These frogs make a sound like an out-of-tune banjo string being plucked!

Later on the hike we went down to the old, abandoned Mead's Quarry. It was once famous for its pink marble. I spotted a be 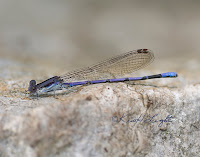 autiful purple and blue damselfly on a rock at the beginning of the hike. I truly appreciate my patient friends and husband for putting up with me stopping to change my lens on the camera and then taking numerous photos. I was happy with the photo of this beautiful insect! Later, as Terri and I looked at the old 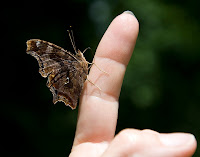 graves in the Mead Cemetery, I felt something tickle my leg. No, it wasn't a funny ghost, it was a Question Mark Butterfly drinking sweat! When it went onto my finger I was able to get a good, close-up of it!

There are some nice overlooks of the lake below. I got a shot of Terri, Rod and Ken

ny at one of them. Not many overlooks on park trails are made of pink marble! The trail has a fairly steep grade to the top, but it is not too difficult. There weren't many wildflowers blooming in the woods at this time of the year. It must be spectacular when the invasive Wisteria is in bloom, it was quite prevalent on one end of the quarry. 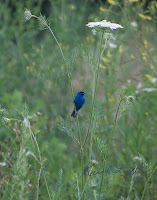 and spotted a flash of blue. It was a male Indigo Bunting! I quickly changed lenses, dropped my pack and asked Terri to watch it, sneaked across the abandoned railroad track and started snapping. I could not believe my luck when he flew closer to me and landed on a large Queeen Anne's Lace plant! Wow, what a shot! This is a bird that has eluded me for years. I had one really lousy shot that I took in the Smokies several years ago, but it was very blurry. Now I have a shot that people can actually tell what the bird looks like! :)
Posted by Kris Light at 5:50 PM