Wildflower enthusiasts and an unusual moth

Yesterday was my big day leading hikes at Frozen Head. I was a bit worried as I drove north through sprinkles of rain on my way there, but the clouds began to part and we ended up with a nice day! I met 25 of my new friends from the Southern Appalachian Nature Photographers (SANP) and from the Photoshop class that I'm taking in Knoxville. We headed off down the Panther Branch trail, it used to be an old road, so it was perfect for large numbers of tripods!
We enjoyed seeing the wildflowers, which included: White Trillium, Vasey's Trillium (below), 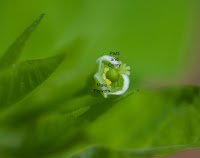 ousewort, Showy Orchis, Wood Vetch, Spotted and Yellow Mandarin, Dwarf Ginseng, Foamflower, Jack-in-the-Pulpit, Bishop's Cap, Canada violet (left) and several other violets, Violet Wood Sorrel, and the Cumberland Spurge. I like to tell my groups that the Cumberland Spurge (right) should have been the "Official Flower of the Women's Movement" because it has a superior ovary surrounded by male flowers! :) I've labeled this photo to show the parts. I get a kick out of picking on the men in the groups! Ha!

In the afternoon I led a hike for the park's wildflower pilgrimage. I was amazed and thrilled at the number of people who came to see and learn about the flowers! There were 25 - 30 folks who came. One 6th grade boy had a ball hunting for insects, millipedes and salamanders along the way. He added a lot of excitement as we went along the trails!

On Friday afternoon I was happy to see the first Hummingbird Clearwing Moth of the season in my yard. I 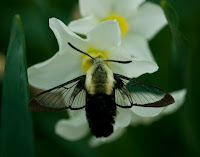 think these moths should be called "Bumblebee moths" because that is what they really look like. I enjoyed watching it flit from flower to flower as it sipped nectar from the Narcissus plants. This was one rare time that it was still long enough to get a clear photo of it.

I've always wanted to see wildflowers because they really look beautiful. Thanks a lot for sharing these photos.