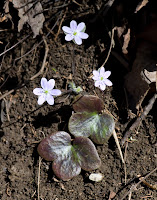 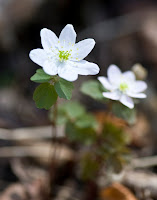 Last Wednesday I headed over to Haw Ridge to see what might be in bloom. The flowers are about 2 weeks behind this spring due to the colder-than-normal winter we had. I was happy to find Bloodroot, Round-lobed Hepatica (left), and some Rue Anemone (right). Some of the other flowers included Spicebush, Bluets and Toothwort.

I got distracted a couple of times by the rocks along the trail. Many of the limestone rocks are loaded with fossils of bryozoans and brachiopods (shells). Using my mac 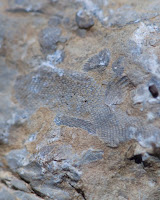 ro lens, I was able to see the tiny holes where the ancient animals once lived. 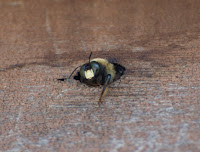 The next day I went to the science museum to pick up the equipment for my class the following day. As I was loading the car I noticed several large carpenter bees flying into holes they have bored into the wood along the roofline. I grabbed my camera and snapped some shots of the bees as they peered out of their nest holes. These little gals can do a lot of damage to wood when they make large tunnels.

My next stop was the University of T

ennessee Arboretum. One of the most gorgeous sights in Oak Ridge each spring is to see th

e Star and Saucer Magnolias in full bloom. Residents always hope the temperatures don't plummet and turn the beautiful white and pink flowers brown. It looks like we may be in for a good show this spring! The slightly-later blooming Saucer Magnolias (right) were just shedding their fuzzy brown winter coats, getting ready to put on their spectacular show! The flowers have a wonderful aroma, adding to the "sensory pleasures". :)

As I wandered along the bank of the pond I

heard frogs plopping in the water as I approached. Those little critters are so hard to see! Suddenly I saw a brown head sticking out of the water at the edge of the pond. I was happy to see it was the Brown-banded Watersnake that I have enjoyed seeing over the past few years! I knelt slowly and snapped pictures to see how close it would allow me to get. It must be fairly used to people, it let me get within 18" before it swam away. These snakes are not venomous (or "poisonous"), they eat frogs and fish. I wanted to get a photo of it with its tongue out, but I wasn't fast enough! Even if you don't like snakes, you have to admit, that face is adorable! :) It seems to have a smile!

Yesterday Kenny and I went hiking in the Smokies with ou

r friends Terri, Rod, Gary and Jana. We took a different route to go there so we could avoid the traffic in Sevierville, Pigeon Forge and Gatlinburg. Hwy. 416 was a pretty, scenic route through the country until we had to detour due to an overturned cement mixer in the road! The detour was winding and quite narrow in places (especially where the road became one lane!). One redeeming thing about the detour was getting to see a little covered bridge that Gary knew about. It is called the Harrisburg Covered Bridge. It was built in 1875 and restored in 1975 and again in 2005.

We arrived at the Porter's Creek trail about 1/2-hour later than we had hoped. This trail is one of the best in the park for spring wildflowers. A 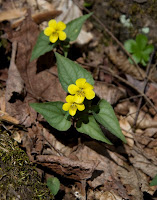 lot of other people had the same idea we did about seeing the blooms, there were car

s from all over the eastern US! I'd never seen that trail so crowded. Since it is a 3.7-mile hike to the campground, it wasn't overly crowded. We saw Bloodroot as soon as we opened the car doors. Along the trail we soon spotted Halberd-leaf (left) and Round-leaf Yellow Violets (right), Wood Anemone, Sharp-lobed Hepatica, and Carolina Spring Beauty. The trail follows Porter's Creek and crosses it a couple of times. After the last bridge, the scenery takes a turn for the better. The hillside and the woods below the trail is covered in many kinds of wildflowers, including Hepatica, Spring Beauty, Dut

The forest floor is covered with wildflowers in that area, soon the Fringed Phacelia will look like snow on the ground.

We ate lunch at Fern Branch Falls. I was 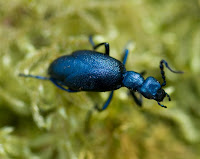 excited to see a gun-metal blue Oil Beetle crawling across the moss near the stream. These beetles have the most interesting and unusual antennae. Some of the other insects we saw were small blue butterflies and a few anglewing butterflies (either Commas or Question Marks). One kind of insect we were NOT happy to see were the thousands of terribly annoying little bees that crawled all over us and even stung 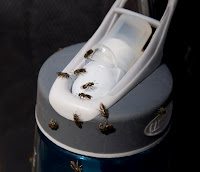 us a couple of times! They looked like large sweat bees. Here is a photo of them crawling all over my water bottle! :( They were everywhere --- on the ground, on the trees, and even on us! We had never seen these insects before. Maybe the 80 degree weather brought them out early!

hike, especially in the winter! The fellow who wore this one had to change when he got to the campground. I guess he had soaked it while hiking with a heavy backpack in the warmer than normal temperatures! I'm sure carrying this "drying rack" didn't help! :)
Posted by Kris Light at 9:06 PM

Good to see your natural report blog, full with bees, oil beetle, snack, beautiful Star, Hepatica, Anemones, Saucer Magnolias buds and your cotton T-shirts for hiking. I like your post, it's interesting.