This has been a bizarre wildlife day at our house! First, this morning Kenny and I were in the living room when we heard a loud thud and felt the wall shake from the basement. I figured it was a large bird that hit the picture window. We went downstairs and sure enough, there was a white outline of a large bird on the glass. I looked out the window but didn't see anything. When Kenny opened the door to check outside, he said, "There's a hawk sitting on the back porch"! By the time I could get over there it had taken off to a tree branch. Unfortunately, I didn't have my camera, so I missed getting a good photo of a Sharp-shinned hawk up close! :( Most likely it was trying to attack one of the birds at the feeder and hit the window at high speed. I'm glad it didn't break its neck and die! A few weeks ago a Piliated Woodpecker hit the upstairs window, that sure made a loud noise!

Later in the day I was weeding the garden and I spotted a bright purple pillbug (roly poly). I grabbed it, put it in 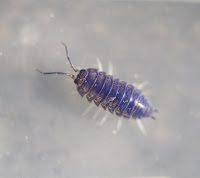 a plastic container and ran in to get my camera. I had seen one of these a few years ago but I didn't know why it was purpl

e. A check on Google led me to a website that answered my question. These creatures can be infected by an iridovirus that grows beneath their exoskelton, the virus refracts the light making the animal look blue or purple. It is eventually fatal to the animal.

Taking a photo of the pillbug with a flash (right) really makes the blue color show up! Click on the photo to enlarge it.

I named it "Prilosec" (get it, "little purple pillbug?!) Sorry for the bad pun! I couldn't resist it! :)

Kris,
That is an awesome picture! Too bad that condition is lethal... :( At first I thought you had discovered a new species!!!!

Fantastic photo! The bird-window bit makes me sad, though. You can use netting or cutouts of falcons to keep them from doing that.