There are 4 words that strike terror into the heart of every computer user... "Eminent Hard Drive Failure"! Unfortunately, I saw those words flash across a black screen on the monitor on Sunday night! So, I've been unable to download my photos from my camera, update this blog, or anything else that relates to this computer until tonight. You don't realize how much you use your computer until you can't!

For several years I have heard about the Roan Mountain Naturalist's Rally at Roan Mtn. State Park in upper east Tennessee. So, finally this year Kenny and I decided to go. We went up last Friday. The keynote speaker that evening was Dr. Lincoln Brower, a world-famous Monarch butterfly researcher. I had read about him for many years since I got involved in raising Monarch caterpillars. He was very interesting, down-to-earth and personable. Much of his talk was about his research on the Monarchs' overwintering grounds in the mountains of central Mexico. That area is on my "bucket list", I really want to go there some day and see the millions of Monarchs that cover the trees and explode into the air in the warmth of the morning sun. The next day he gave a talk and walk u

p at the Miller Homestead high on a mounta

in in the park. Since the fields in the area are full of nectar-source flowers, they are natural stopping areas for butterflies of all kinds. I spotted this beautiful male Tiger Swallowtail sipping nectar from a thistle after his talk. The park has been designated a Monarch Wayside, and they now have the sign to prove it! Dr. Brower placed the sign on the kiosk post. He was kind enough to pose for photos with his "Monarch groupies"

, me included! :) The T-shirt I was wearing has a Monarch caterpillar and chrysalis "question mark" on the front and on the back is the answer, a Monarch butterfly.
The old Miller Homestead was an interesting

home with a barn and other outbuildings. The home has been kept the way it looked when the family lived there. I was surprised that the rooms weren't roped off like they are in most old homes. I liked looking at the old sheets of newspapers and Life maga

zine covers that were used as wallpaper in the upper bedrooms.

Later that day we went on a Geology of Roan Mountain hike that was given by a geologist, also the president of the Friends of Roan Mtn. group. We learned about the different rocks that make up the landscape of the park including white

quartz, Beech Granite, Strawberry Gneiss and the crumbly, ever-present schist (my students love that word!). Ha! Not only were there rocks of all kinds and sizes, but it didn't take much to get me distracted by the beautiful mushrooms. We saw red, yellow, orange, brown, and even purple ones. The winner of the " 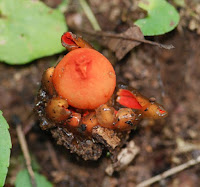 weird mushroom of the day award" would definitely have to go to the Stalked Puffball-in-Aspic. As that mouthfull of a name implies, these puffballs are on a long stalk and they emerge from the ground surrounded by a thick coat of slime (the "aspic"). 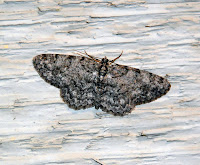 sheet, a blacklight and a shop light. It was amazing how many different and beautiful insects he had seen. At the end of the program he had a light and sheet set up outside so the participants could try it out. We saw mostly caddisflies and moths, like this striking Tulip Tree Beauty.

We spent two nights at a motel in Elizabethton. On Sunday morning before we pa

cked up the car I noticed some beautiful blue Morning Glory flowers blooming outside our window. I grabbed my camera and got some beautiful shots. It is amazing how those flowers look like they are glowing in the center.
On Sunday we passed on the other activities and went to Kingsport to visit Kenny's brother. His neighbor had flo

wers in his yard that I went to look at. What a nice surprise it was to see a couple of Praying Mantises! The first one was chomping on a butterfly on a rose bush, I'll spare you the gory

details! The second one was hunting for an unlucky insect on a marigold plant. I had to laugh when she turned around and looked at me. They are one of the few insects that can move their head independently from their body. I got a good close-up of their powerful, spiked front legs. No wonder they can capture insect prey so easily!

One more "pretty" picture and I'm going to quit tonight. This is the inside of a mandevilla vine flower. I liked the effect!