What an exciting hike we took yesterday (July 19) in the Smokies. Our long-time friends, Terri and Rod, invited us to hike to Grotto Falls and then on up to Brushy Mountain (no connection to the Brushy Mountain State Prison in Morgan County!). Grotto Falls is a very popular tourist hike just off the Roaring Fork Motor Trail near Gatlinburg. Getting through the Sevierville, Pigeon Forge and Gatlinburg traffic on a Saturday morning was not fun and we had a bit of trouble getting a parking place at the Tr

illium Gap trailhead. We finally got on the trail around noon. It is a fairly easy 1.2 mile hike to the falls. There was quite a crowd when we arrived at the falls. It was difficult to get nice photos of the falls without someone in the shot because the trail goes behind the waterfall and everyone had to stop and have their photo made there! I finally got a break and took this shot. The weather was fantastic, it was overcast and the temperature was in the 70's. We couldn't believe it was the middle of July and we weren't drenched with sweat! The overcast sky made great light for getting the "silky" look in my waterfall photos.

From the falls we left the crowds and headed another couple of miles up to Brushy Mountain. It was the first time Terri, Kenny and I had been there. After a quick lunch at the trail junction, we went up to the top. Brushy Mountain (at ~5000') has a heath bald, it is covered with Rosebay Rhododendron,

Mountain Laurel, and blueberry bushes. I

would have loved to have seen the Mountain Laurel in bloom in late May, what a sight that would have been! We had spectacular views of Mt. Leconte and the other peaks in the Smokies.

Being the middle of summer, most of the woodland wildflowers had already bloomed. We did see a few Rugel's Indian Plantain growing in the higher elevations. There was also some S 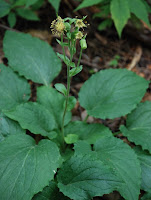 The biggest excitement of the day though, was seeing a Black Bear ripping apart a log just off the trail as we hiked back down to the pa

rking lot! I wasn't sure what was more entertaining, watching the bear or watching the tourists freaking out about the bear! One family nearly knocked us off the trail as they ran to get away from it! That is one thing you don't want to do if you encounter a bear on the trail. This bear was most-likely a yearling, it wasn't very large. It mostly ignored the gawking people on the trail above as it ripped large chunks of decayed wood in search of grubs or ants and it also ate ferns and other plants. We have been to the Smokies numerous times, but we seldom see bears, then if we do, it is usually at a distance. We'd never been this close to a wild bear before. We respected its distance and enjoyed watching it eat.
Posted by Kris Light at 9:45 PM

I stumbled on your blog when I was searching for any updates on the bear that has been stealing backpacks up at Grotto Falls. We were there on the 27th and because I severely sprained my ankle we had a long talk with a ranger who told us that they were trying to catch the bear to take him to another part of the park. He had stolen several backpacks when people had put them down to take pictures or to rest.

How wonderful that you caught a bear on film. Your pictures are amazing! What kind of camera do you have? We have a Nikon D80, but are still learning how to use it and capture great images such as your's!