I haven't had anything weird or gross on my blog lately, so today I'm posting stories about both!
Kenny and I went to Kingsport, TN this weekend to see his brothers, the oldest was home from Madagascar for the week. His middle brother has some rose bushes that I went to look at. I like domestic flowers too! I noticed some green aphids, a little spider and some ladybug larvae. These little critters are voracious eaters of aphids, so I was happy to see them on the leaves of the rose bushes.

Just when I think I've seen everything bizarre that Mother Nature has to offer, I come across something like this! As we we

re driving by one of Kenny's former schools I spotted a "fairy ring" of mushrooms in the mulch of a nearby home. We parked the car and I got my camera ready to take some photos. Just as I was walking over to the mushrooms, the homeowner came out of his house. I have to explain myself out of some pretty strange situations sometimes! I explained that he had a fairy ring (mushrooms growing in a circle) and that I'd like to get a photo. As he and my husband talked, I looked a bit more closely at some large mushrooms that had been eaten by something. Suddenly a small (~1/2" long) white maggot with a brown head came crawling out of the mushroom that was riddled with holes. (Click on the photos to enlarge them) Then I saw another and another. Soon there were several of these ma 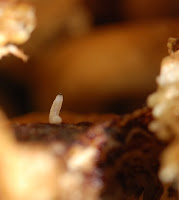 ggots crawling around on top of the mushrooms. I guess they were getting warmed by the sun. As I was focusing my camera on one it suddenly curled up then launched itself several inches! The more I watched, the more I noticed others doing that too! What a bizarre method of quick locomotion! I tried to get a picture, but they were just too fast! The one in the photo on the right is getting ready to jump. I'm going to send a photo in to Bugguide.net and see if someone there can identify it for me. Those folks are great about helping ID strange critters like this! :)
Posted by Kris Light at 9:28 PM