Caterpillars and a funny moth story 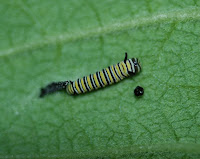 I have 2 photos of Monarch butterfly caterpillars in different phases. The first photo is of a small one that had just molted; the face piece and the discarded skin are visible. Surprisingly, the caterpillars eat their molted skin, it is good protein that they don't want to waste! They don't seem to eat the face pieces. This little guy was less than 1/2" long.

The second photo is of this caterpillar a few days later, it had grown considerably. When I took the critter cage out to clean it and get some more milkweed, the caterpillar rolled up into its defensive position. Note the interesting color patterns of the skin.

This past Sunday Kenny and I stopped at the grocery store. I noticed a cute little girl, n 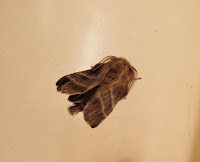 amed Rylee about 4 years old, carrying a large plastic jar. I asked what she had in it and her mother said they had been raising Tent caterpillars the past few weeks. The moths had just come out of their coccoons and were resting on the side of the jar. I asked if I could take a photo of them for my website. Fortunately, I had my little pocket camera in my purse, I can get pretty good close-up photos with it. The color is a bit off, fluorescent lights do bad things to pictures! I told them I once took a critter box with Monarch caterpillars into Kroger grocery store because it was too hot to leave them in the car! No one ever knew! :) It thrills me to see young kids so interested in nature and parents who encourge that interest! This moth is most likely a male due to the large, feathery antennae.

Today was a difficult day at school. I made the announcement on our school TV station that today was my last day and I would not be returning next year. This was the first time the kids had heard the news. Even though it has been a month since I decided not to return (because of losing my room to be made into a new 4th grade classroom and pay inequities), it was still very hard knowing it was my last day. After being there 13 years, I feel like I'm losing a lot. The kids were so supportive giving me hugs and notes. One note from a first grader really touched me, it was decorated with a butterfly, a caterpillar eating a leaf, and clouds with lightning and rain drops; it read, "Thank you for teaching cool things. I like science so much I want to teach science." That is why I am going to miss being there so much!
Posted by Kris Light at 9:34 PM