After receiving the devastating news this week that I may lose my beautiful, big science room at the school where I have taught for the past 13 years (due to funding changes), I had to get out in nature and clear my head on Friday. There is nothing like a good hike in the woods to help take your mind off negative thoughts! Kenny and I took off for Haw Ridge (a local greenway) at 1:00 p.m. and got off the trail at 6:00 p.m., with 20 miles of hiking trails there, it isn't hard to spend a lot of time there.

The first distracting thing I found was in the parking lot before we even started our hike! It was a fly on a Redbud flower that didn't move even as I got closer. I zoomed in on it with my macro lens and noticed white fuzz coming from its abdomen. (The photo is a bit out of focus, the wind was blowing!) I knew immediatel 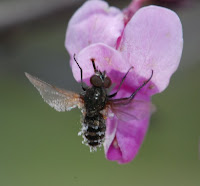 y that it had been infected with a fungus. The fungus is like something out of a science fiction / horror movie. It grows throughout the fly's body, consuming it as it grows. Before it sprouts the reproductive spores, it affects the brain, causing the fly to crawl to the end

of a branch or a blade of grass. After the fly dies, the white sporangia burst from its body to release spores that may eventually infect another fly, completing the cycle! Later on up the trail, I saw an ant dragging something across the ground. It was a dead wood roach (right)! It was amazing to wa 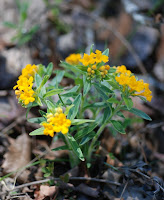 tch the ant pulling another insect that was larger than itself! How is that for pest control!?

The wildflowers are quite pretty at Haw Ridge. I enjoyed seeing the violets, phlox, trillium, Spring Beauty, Rue Anemone and others. The Puccoon (left) was in full bloom on the trail in the cedar barrens. Once I saw a Zebra Swallowtail butterfly on one of the flowers, but it didn't stay st 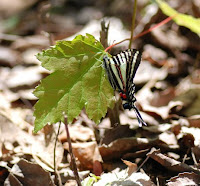 ill long enough to get it in focus. Later I did manage to snap one photo when one landed on a maple leaf. The last time I took a photo of one of these butterflies was when it was on a kid's shoe at science camp last year! They are not the most cooperative butterflies to photograph!

We stopped at a picnic table along one of the trails to eat lunch. After our

break we resumed our hike. I noticed a single leaf growing out of the ground with a knobbed spike next to it. I immediately recognized it as an Adder's Tongue Fern (left). I had only seen them before at Frozen Head State Park. It doesn't look anything like a typical fern leaf. I was surprised I had never seen it at Haw Ridge before since we had hiked there so many times. When we hiked up Saddle (a moderately rated trail

in a valley between two steep trails), we enjoyed seeing an amazing number of wildflowers. The Foamflower was especially pretty growing in masses along the little stream (right). I was also happy to see the beautiful pink Pinxterflower (a wild azalea) in bloom on top of the ridge. They are not a very common flower, so it is

always a treat to find them in bloom. They have a lovely aroma too.

I felt a bit better after the hike, but I'm still heartbroken about the possiblity of losing my room. It may have to be used to become another 4th grade classroom and I would be moved into what was the old boys' locker room on the far end of the school by the gym. The room is much smaller than what I have now, there's no storage room and the windows are so high I wouldn't see anything but the top of a tree. It would be like making someone living in a beautiful, spacious mansion in a great neighborhood pack up everything they own and move into a shack high in the mountains next to an ugly coal mine with no neighbors nearby!
Posted by Kris Light at 4:26 PM

beautiful photography. i will be back again.
nikonsniper