Strange "things" in my neighborhood!

After a day and a half of rain, I was ready to get out and see what had popped up. Boy, was I in for some surprises! I went to the cemetery down the street to photograph the lichens when they were wet. I noticed something odd about the cedar trees, some of them had a weird, orange, jelly-like growth on the ends of the branches. My first thought was maybe it was a stage of the Cedar-Apple Rust Gall Gymnosporangium juniperi-virginianae (right). I have never noticed this fungus before, perhaps it has to be wet to be easily visible. I have contacted a plant disease specialist by email, perhaps he / she will tell me what this is! This may be another species of Gymnosporangium.

***Update*** I heard from the Cornell Univ. researcher today (3/16) and she said the slimy growth is Quince Rust (caused by the Gymnosporangium clavipes fungus).

Then I heard the sound of Cedar Waxwings chirping in a tree in the schoolyard nearby. My one chance to get a fantastic shot of those b

eautiful birds and I had my macro lens on my camera! :( They are very skittish birds, so I tried to sneak up as clos

e to them as possible. They were gorging themselves on old crab apples both on the ground and in the tree. I managed to get one shot, oh how I wish I had my telephoto lens! I did get an interesting shot of them flying away. Not the single robin in the upper left corner of the photo. Click on the photos to enlarge them to see the birds better.

The next thing to catch my attention was an old empty cooler that had probably been left by the soccer players. It was full of rainwater, but I noticed something that looked like specks of pepper floating on t

he surface. When I zoomed in on them with my macro lens, the specks moved! I realized they were Springtails. The large cluster had what appeared to be 2 larger (relatively speaking, they were only ~2mm!) adults and hundreds of smaller nymphs in various stages and colors. A few were scatter 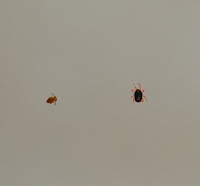 ed about on the water surface. As I was photographing one small cluster, I saw a tiny black spherical creature with neon-orange legs! It appeared to be feeding on the springtails. As I zoomed in closer, I could tell it was a predatory mite (right)! Two of the mites are visible in the cluster photo on the left. The two long brown insects are probably the adult stage of the springtails. Since there is such a huge number of nymphs and just 2 adults, I wonder if they reproduce by cloning like aphids do?

So, just when I think I've seen everything weird in my neighborhood that I possibly can, I have a day like this! Isn't it wonderful to still be able to have such interesting surprises!? :)
Posted by Kris Light at 3:33 PM