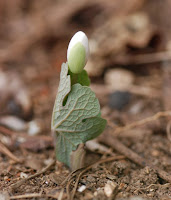 Ahhh, Spring is in the air! I was delighted to find the first Bloodroot (Sanguinaria canadensis) in bloom in my neighborhood today. It was in a loose bud when I first noticed it. I like the way the bud is wrapped in a leaf, like a cozy blanket that protects the flower before it blooms! :) About 3 hours later I went back to look at the flower and was surprised to see it opened! Note the curled sepal on the ground below the flower. 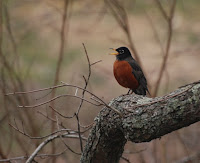 A second sign of spring was the amorous action of the birds. Yesterday I saw a male cardinal take a seed from the feeder and place it in a female's mouth. I guess that is the "avian answer" to chocolate! The male Towhees were a bit more aggressive, they chased the females (who were playing hard to get!) around the yard. I enjoyed hearing a male Robin singing from the tree behind the house. It was a territory "song" because I heard another Robin calling in a tree nearby. 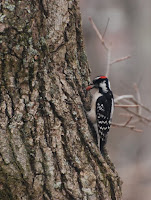 Another bird event, though not necessarily related to spring, was a Downy Woodpecker I photographed eating a peanut. I spoil my birds by buying them "gourmet" birdseed, complete with dried cherries and peanuts. :) It was fun to watch many of the birds take a peanut from the feeder, fly to the trunk of the tree and then stick the nut into a groove in the bark so they could eat it more easily.

While I was out inspecting the flowers in my garden, I noticed something inside the trumpet of one of the daffodils. It was a tiny spider! My first spider of the year! It had spiky legs and an interesting pattern on its abdom


Some flowers I was not too happy to see getting ready to bloom were the male (staminate) Red Cedar tree flowers. Soon they will burst open with lots of allergy-inducing pollen grains. Cedar trees are dioecious, meaning they have separate male trees and female trees. The female trees produce the blue "berries" in the fall. The male trees have a slight gold tint at this time of the year due to the male flowers. 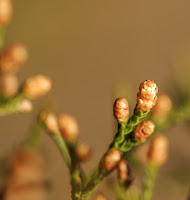