Mystery critter at the UT Arboretum

When I went into the office at the arboretum today, Lynn (the secretary) said, "I'm glad you are here, Yvonne (a staff member) found a strange bug we want you to look at!" It was in an empty margerine bowl in the director's office. When I opened the lid I was amazed at what I saw! 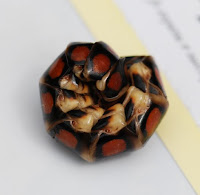 Whatever the thing was, it had curled into a tight ball! It looked like part armadillo, part millipede! I was leery to touch it, I didn't know if it would bite. When she told me it had legs at just the front near the head I figured it had to be an insect of some sort. After observing it in Lynn's office for a few minutes and it staying curled up, I decided to take it outside and put it in the sun to see if it would open. That did the trick! It slowly began to move and I was surprised to see how big it was. It turned out to be ~3" long! I finally decided that it was some kind of beetle larva. 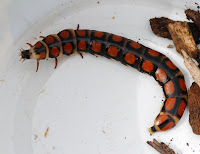 After spending a few minutes on Bugguide.net, Lynn found out it is a Giant Glowworm larva. I had to laugh when I saw that many of the other photos of this larva were taken in a cup or some other container too! When I tried to photograph it on the ground, it immediately tried to bury into the soil. Its favorite food is millipedes! With the bright coloration it has, I wouldn't be surprised if it was poisonous. I was interested to learn that the females are bioluminescent, they produce light as a deterrent to nocturnal predators. They are also called "Railroad Worms" and are in the family Phengodidae of the order Coleoptera.